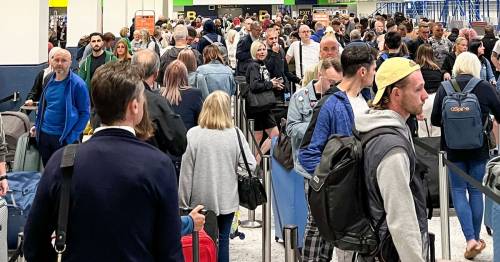 Holidaymakers have been left waiting in mile-long queues for check-in at Manchester Airport.

Photos show the frustrated passengers in the snaking lines between the busy Skylink, Terminals One and Two and the site's railway station this morning.

Others were snapped waiting in an underground car park.

It comes on the first of three days of nationwide rail strikes which are expected to result in travel chaos in much of Britain.

The National Union of Rail, Maritime and Transport Workers (RMT) is leading the mass walkout of around 50,000 workers from 13 different operators.

It is the biggest such action since 1989.

The strikes are taking place today, as well as on Thursday and Saturday, paralysing British Rail, as well as airports and roads.

Prior to the walkouts, Manchester Airport had been suffering in recent weeks as families tried to jet off on half-term holidays amid industry staff shortages and flight cancellations leading to pandemonium.

Have you been affected by the queues today? Let us know at webnews@mirror.co.uk

The likes of TUI, easyJet, Jet2 and Ryanair have been opening baggage drop-off desks hours early in an effort to curb some of the congestion.

Last week, an airport spokesman said it had welcomed 400 new staff to its operation since the start of the year.

They added, it was also "making good progress in improving security wait times".

Meanwhile, only a fifth of services running and half of lines closed, due to the biggest strike by rail workers for a generation.

Last-ditch talks on Monday failed to resolve the bitter dispute over pay, jobs and conditions, with all sides blaming each other for the lack of progress.

Much of Britain will have no passenger trains for the entire day, including most of Scotland and Wales, the whole of Cornwall and Dorset, and places such as Chester, Hull, Lincoln and Worcester.

Services will primarily be restricted to main lines, but even those will only be open between 7.30am and 6.30pm.

Those operators not involved in the industrial action will still suffer from disruption due to Network Rail signallers going on strike.

London Underground workers will also walk out on today.

Unions reacted with fury to reports Labour has banned its frontbenchers from picket lines, in a memo leaked to Politics Home.

Sharon Graham, general secretary of Unite, said: "The Labour Party was founded by the trade unions and we expect Labour MPs to defend workers, by words and by actions."

This week's strikes will cause travel misery for millions.

Pupils and parents are being urged to make an alternative plan for getting to school for A-level and GCSE exams on Tuesday and Thursday.

Motorists are warned to expect a surge in traffic as train passengers switch to road transport.

Prime Minister Boris Johnson is expected to say ahead of a Cabinet meeting on Tuesday that unions are "harming the very people they claim to be helping".

He told BBC's Newsnight that Network Rail had "escalated" the dispute during Monday's talks, saying: "They have issued me a letter saying that there are going to be redundancies starting from July 1.

"So rather than trying to come to an agreement in this dispute, they've escalated it by giving us formal notice of redundancy amongst our Network Rail members."

He warned the dispute could continue for months.

Previous : Russia risks running out of weapons as Ukraine deadlock deepens – Western officials
Next : Tragic story behind Prince William’s name and why Diana wanted to call him something else