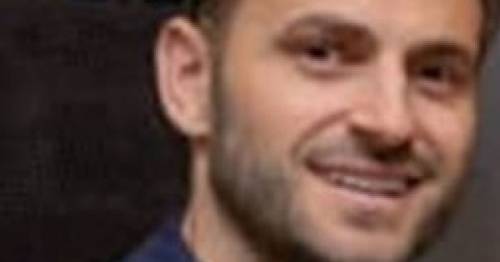 An alleged hitman wearing a latex mask posed as a litter picker to stalk his alleged victim before shooting him in front of his family, a court has heard.

Flamur Beqiri, 36, the brother of Real Housewives star Misse Beqiri, was repeatedly blasted from behind at close range.

His wife Debora Krasniqi and son, two, saw him killed on Christmas Eve, 2019.

They were returning to their home in Battersea, South West London, after dinner in a restaurant.

Hemissi flew into London on December 20 and then travelled to Copenhagen, Denmark, in the early hours of Christmas Day, the court heard.

Police stand outside the crime scene where Flamur Beqiri, 36, a father of one, was murdered
(

He is said to have stayed in a river front Battersea flat and carried out reconnaissance trips in disguise, using a bicycle and a litter picking device earlier bought by accomplices.

Two days before the murder, Hemissi allegedly dressed in work clothing, including a jacket and trousers with neon flashes, boots a hat and gloves.

Mr Heywood told jurors he cycled to Mr Beqiri's home, then walked around the area for some four-and-a-half hours with a "black bag in one hand and a litter picker in the other".

"Not only was his head covered with a dark hat, his neck wrapped up high towards his face, his eyes covered with sunglasses, but also, it will be a matter for you to consider, it appears as if he was wearing a latex mask as well," he told the jury.

But the court heard he aroused the suspicions of a local dog walker, who challenged Hemissi, causing him to walk off.

"The litter picker outfit was not worn again because his cover is blown, it is as simple as that," said Mr Heywood.

He said Hemissi wore a latex mask with another disguise to carry out reconnaissance the following day and the same dark clothing when he shot Mr Beqiri.

He is on trial with Swedish nationals Estevan Pino-Munizaga, 35, Tobias Fredrik Andersson, 32, and Bawer Karaer, 23, who are said to have been part of the team "on the ground" sent to assist Hemissi. They also deny murder.

UK national Clifford Rollox, 31, of Islington, north London, and Dutch national Claude Isaac Castor, 21, from Sint Maarten in the Caribbean but resident in the UK, deny perverting the course of justice.

Previous : Piers Morgan rages at GMB’s Adil for ‘mocking’ him and accuses him of ‘destroying’ ITV show
Next : Exact date snow will hit this week and areas expected to escape UK’s Arctic blast