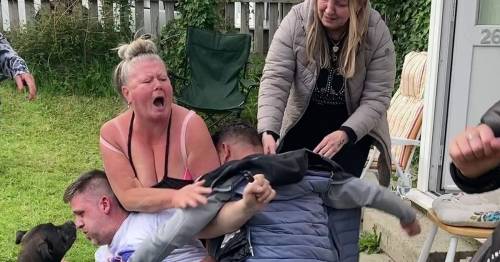 A mum’s 50th birthday party descended into a family brawl with one of the participants eventually given a lift home by police.

Lisa Keegan had been enjoying her boozy celebrations until family friend Adam, 40, snatched an e-cigarette from one of the teenagers at the party.

When her daughter's boyfriend Tony, 52, came to the lad’s aid, the situation became heated and Lisa tried to separate the enraged pair.

Soon the two men were exchanging drunken punches, with some accidentally heading towards the birthday girl rather than their opponent.

Furious Lisa eventually separates the pair to gain control, before finally warning Tony away by picking up a chair and wielding it towards him.

The humiliating brawl during the birthday party was captured on video
(

The brawl ended with a visit from the police
(

The embarrassing scenes were captured on video.

Lisa, from Colne, Lancashire, said: "You're only 50 once and this is certainly a birthday I'll never forget, it was mayhem.

"Adam was just winding people up, and he took [a lad's] e-cig. Tony stuck up for him, but instead of punching Adam he was punching me.

"They couldn't pack a punch between them because everyone was so drunk. I was in the middle of them to break it up, but I should have just left them to it.

The mum was nearly hit by some of the rogue punches
(

The family called the video "funny to watch back"
(

"The video's hilarious. It's like something out of Shameless. I was like a meme. When I fell over backwards I just started laughing. Even the dog was barking to tell them off.

"When I watched it back, I thought 'oh my days'. I was embarrassed. We've been getting a lot of stick about it but some people are calling me a legend.

“A lot of my friends think it's brilliant."

Lancashire Police were called and have confirmed they escorted a man home as enquiries continue.

Despite police being called to the scene both Tony and Adam say they made up at the end of the night.

Tony added: "It's funny to watch back. My girlfriend was falling over, Lisa was shouting and yelling, Everyone's falling all over the place.

Lisa Keegan had been celebrating her birthday
(

"Adam was being cocky, but we were all p**sed up. It was more funny than anything else. He's not my mate but I know him. He's a nice lad.

"I accidentally threw a few punches at her but I didn't mean to. I didn't even know. I was tired more than anything. I'm too old for that sort of thing.

"There wasn't anything malicious in it. We sorted it out and the police gave me a lift home.

"It was more like shadow boxing. We'd had one too many drinks, then we had a few cross words and that's what happens.”

The video, which Colleen captioned 'this is how birthday celebrations end', has earned more than 13,000 shares and 300 comments.

Previous : Mystery as two dead bodies found in van with police confirming deaths ‘weren’t natural’ – World News
Next : Rail strike: How much are train workers paid and why do the figures differ?