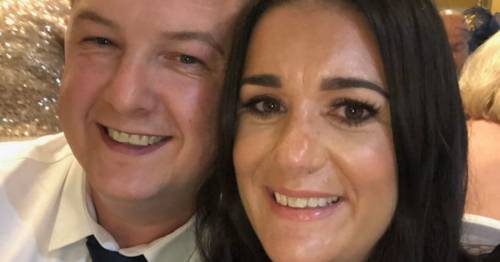 The heroic taxi driver who survived the Liverpool terror attack said it is a "miracle that I'm alive" after his cab was blown up.

David Perry and his wife Rachel have thanked the public for their "amazing generosity" in the wake of the Remembrance Sunday attack.

Emad Al Swealmeen, 32, died when an improvised explosive device went off in a taxi at just before 11am.

David released a statement through the police which reads: "On behalf of myself, Rachel and our family, we would like to say thank you to everyone for all your get-well wishes and for your amazing generosity. We are completely overwhelmed with it.

The couple have thanked the public

"A special thanks to the staff at the Liverpool Women's Hospital, the staff and medical team at Aintree Hospital, Merseyside Police and Counter Terrorism Policing, who have all been amazing.

"I feel like it's a miracle that I'm alive and so thankful that no one else was injured in such an evil act.

"I now need time to try to come to terms with what's happened and focus on my recovery both mentally and physically.

"Please be kind, be vigilant and stay safe."

Shocking footage shows David's cab exploding and him scrambling away a moment later.

Al Swealmeen, a failed asylum seeker who changed his name to Enzo Almeni, built the device that was so powerful that police said it could have caused 'significant' deaths.

Video of the blast suggests the detonator exploded but the main device failed to trigger.

Mr Perry released a statement through the police
(

The Sunday Times reports that after learning of the attack, a male relative of Al Swealmeen posted: “If he was alive, I would be the first to call death upon him should he be found guilty."

Another sickened member of his family distanced himself from him calling him a "coward" and saying he failed to understand why Al Swealmeen committed such a despicable act, the paper adds.

It has also been revealed that Al Swealmeen was was not the penniless refugee from Syria he claimed to be but came from a middle class family living in Jordan.

The motor racing enthusiast changed his name to Enzo Almeni so he could sound "more western" taking inspiration for his new identity from the late Formula One boss Enzo Ferrari.

He had also given himself the nickname “GT” after Grand Turismo and was so passionate about the sport that he had a chequered flag tattooed on his arm with a chequered flag, the Times adds.

On Thursday Assistant Chief Constable Russ Jackson, of Counter Terrorism Police North West, said they had traced a relative of his and would be speaking to them about the case.

At the age of 25 Al Swealmeen left his parents, sisters and at least one brother behind at the family home in Dubai.

He is believed to have travelled illegally to the UK where he claimed he was a refuge from Syria.

It is believed he hid the truth about his background but admitted he was from Jordan and had family living in Dubai which could be why his asylum application was rejected.

Earlier this week, Home Secretary Priti Patel claimed he had exploited Britain’s “dysfunctional” immigration system by staying in the country.

The UK terror threat level has now been raised from “substantial” to “severe”, meaning an attack is now thought highly likely.

Previous : Nick Kroll and Jason Mantzoukas Have All Kinds of Chemistry
Next : Ivan Toney responds to claims about his performance against former club Newcastle