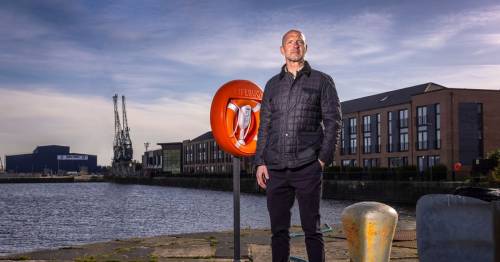 A hero stripped down to his underwear and jumped into docks to save a drowning toddler.

Glynn Powell didn’t think twice before plunging into the cold water to rescue the struggling three-year-old girl who had fallen in.

Video footage shows the moment Glynn, 52, disgarded his clothes and went to the aid of the toddler.

He was relaxing at his dockside flat home in Leith, Edinburgh, when he heard a neighbour shouting for help.

She had spotted a girl floating underneath the water in the water at the back of the building.

The woman had thrown life belts in but the child was unable to hold on to them and had gone under.

Glenn Powell stripped off before plunging into the water

When Glynn realised what was happening, he ran from his flat – taking his clothes off on the way – and lowered himself into the water, swam to the motionless toddler and carried her back to safety.

He put her in the recovery position on the ground, where she soon regained consciousness after some first aid.

He then carried the girl into his flat to await the arrival of paramedics.

The rescue was captured on CCTV footage from his home.

Glynn told the Sunday Mail: “I had just got home at about 4.30pm, had my usual shower and was relaxing in a chair.

CCTV shows Glynn saving a drowning tot who fell in

"I heard a commotion out the back and saw a child motionless under the water 10 metres from the dockside.

“I ran from my flat out the back door, taking my clothes off as I did so until I was down to my underwear.

"There is a four or five-metre drop down to the water and I used the ladder to lower myself into the water to avoid hitting any debris which might have been lying under the surface.

“I swam over to the girl and brought her back to the ladder. I thought she was dead at first and all I was doing was recovering a body from the water.

"However, as I climbed the ladder with the girl on my shoulder, she was suddenly sick. It was the first indication she was alive.

“By the time she was lain on the ground, she had regained consciousness. It was as if she had come back from the dead.”

The girl, who lived nearby in another flat with her mum, had fallen into the water after wandering off.

Glynn, a detective constable, suffered cuts and grazes and was back at work the next day, where he was given a tetanus jab.

He paid tribute to his neighbours, who also helped out with the rescue: “It was a team effort. Had the neighbour not seen her go in the water, she would have died.

"Others called the emergency services or brought out towels. Everyone was in the right place at the right time.

Glynn said: “I’m no hero – it’s what any police officer or member of the public would have done in the same situation.”

His bravery will be recognised this Thursday at an awards ceremony in Edinburgh, organised by Police Scotland.

Previous : Liverpool bomber’s relatives slam ‘coward who should have been executed if he lived’
Next : Teen crying in agony told she ‘probably had stomach bug’ until doctors did scan