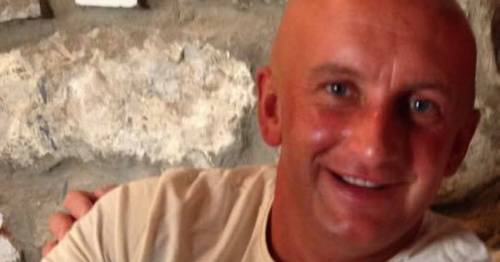 A postman has saved the life of an elderly woman after dragging her from her burning home.

David Flinn, 45, had finished his rounds on November 15 and was on his way to the gym when he noticed smoke coming out of a bungalow.

The hero postie – who previously had 13 years experience as a fireman – stopped immediately, dialled 999 and ran into the house.

He stopped his car, called the fire service and ran to the house.

The dad-of-three said he "heard some groans coming from the living room" – and saw the elderly woman on her hands and knees at her home in Menai Bridge, Anglesey.

David found the woman on her hands and knees at her home in Menai Bridge, Anglesey, after running into the burning building
(

He said: "I had 13 years of experience as a firefighter and I know what to do in these circumstances.

"I dragged her from the living room but it was a struggle to get her any further because she was a dead weight.

"Luckily a woman was driving by at this point and I managed to flag her down and she helped me get her out."

Within approximately five minutes of evacuating the lady from her property, the emergency services arrived at the scene and an ambulance took her to hospital.

The hero postie – who previously had 13 years experience as a fireman – stopped immediately, dialled 999 and ran into the house
(

The fire service has since confirmed that she did not suffer any serious injuries and was discharged shortly afterwards.

David added: "All in all, it was quite a mad morning. I've not been in the fire service for around two years so I've not been involved in this kind of situation for some time.

"Personally, I think the house could have gone up if it had been left for a few more minutes. Luckily a police officer and her husband, who works for a gas company, live nearby. The husband turned the gas off in case the bungalow went up.

"Obviously these kind of situations are best left to the fire service, but I felt compelled to help given my experience.

Things could have gone either way, but I'm just happy that I was able to get the resident to safety."

A spokesperson for North Wales Fire and Rescue Service said: " A casualty – an elderly lady – was conveyed to hospital prior to arrival of our fire crews and it is believed that she did not sustain serious injuries, possible smoke inhalation and was later discharged.

"Fire investigation concluded that the incident was accidental – caused by an electrical fault located in the living room."

Previous : Priti Patel’s officials ‘brand her a moron’ over ‘erratic and outlandish ideas’
Next : Year HS2 will finally be completed and why parts of rail project have been scrapped