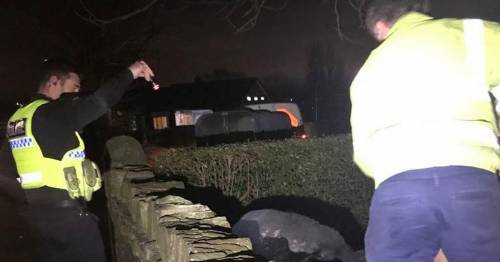 A gardener has relived the moment he captured a rampaging pig which terrorised golfers.

The boar-type animal, believed to be a Vietnamese pot-bellied pig, was one of a pair that charged at players at nearby Lightcliffe golf club.

The Mirror reported yesterday how two men were taken to hospital with minor injuries after the incident on Sunday.

James was driving his wife’s car with his dog and thought the pig was another dog when he first saw it – but then realised it was a “massive black pig”.

Two people were left in hospital after the incident
(

He stopped and called the police and RSPCA while trying to steer the biting animal away from traffic. He said: “Now and again, it tried to get at me.”

A woman arrived at the scene who told him she kept pigs and helped him keep the hog out of harm’s way.

After around two hours, a farmer arrived with a trailer and with the help of a police officer they managed to corral the pig inside using the car seat.

The pigs were seen in Lightcliffe, West Yorkshire
(

James, from Lightcliffe, West Yorks, said he was not frightened by the animal.

“I wasn’t really scared, but I was quite cautious. I was aware that it could bite.

“But the girl was amazing – she even managed to stroke it at one point.”

James said he was happy the incident finished without anyone else getting hurt.

He said: “It was hilarious. I only popped out to get the car.”

But he said things may have ended differently if the boar had made its way to the nearby local school.

He said: “It was very close to the school. If the pigs had been wandering around at school drop off or pick up, with little kids about, it could have been a bit nasty.”

It is believed that both hogs have now been reunited with their owner.

Previous : Real reason why the US President pardons a turkey on Thanksgiving explained
Next : England’s shocking defibrillator inequality exposed as wealthiest have access to 3xs more