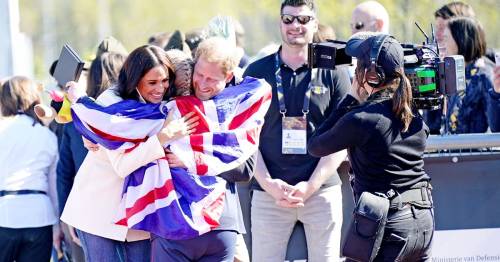 The Help for Heroes charity has reportedly been removed from its involvement in Prince Harry's Invictus Games with the Royal British Legion taking its place.

Despite its role in recruiting and training Team UK since Harry founded the first games in 2014, the Ministry of Defence has taken away the contract.

The Duke of Sussex set up the Invictus Games to help soldiers, sailors and airmen injured in Afghanistan and Iraq take up adaptive sports to rebuild their lives.

Instead the MoD decided to award the contract wholly to the Royal British Legion for the next five years, much to the reported “disappointment” of Help for Heroes staff.

Help for Heroes has assisted 25,000 wounded and injured military personnel and veterans since it was founded in 2007 by Bryn and Emma Parry after they visited soldiers at Selly Oak Hospital in Birmingham.

The Express has reported how the MoD has removed Help for Heroes after the charity said it wanted to evaluate whether the Invictus Games was still providing value for money for those making donations after the next competition in Dusseldorf, in 2023.

The charity also wanted to reduce its potential liability if there was a funding shortfall and share costs more evenly with the two other British team partners – the defence ministry and the Royal British Legion.

But it insisted it had wanted to continue to prepare the British team and remained supportive of Invictus.

Lis Skeet, Services Director at Help for Heroes, told the Express: “Help for Heroes is incredibly proud to have trained, supported and delivered Team UK for the past five Invictus Games.

"However, following extensive discussions, it has been decided by the MoD that the Royal British Legion will lead the end-to-end delivery of Team UK to the Invictus Games for the next five years and will also be the main funder of the programme.

“Unfortunately, therefore, we will no longer be directly involved in Invictus Team UK. We want to emphasise that this was not a decision we made ourselves.”

Harry, 37, patron of the Invictus Games Foundation, has not commented and is not thought to have been involved in the decision.

And the Invictus Games Foundation has vowed to continue working with Help for Heroes on other projects.

A spokesman for the foundation reportedly said: “This was a decision taken by the UK Ministry of Defence following proposals for the team structure moving forward, and not a matter for the Invictus Games Foundation.

“Across our participating nations, we work alongside many military organisations and charities to support international wounded, injured and sick service personnel and veterans, including our programmes beyond the games, and will continue to do so with Help for Heroes.”

MoD officials insisted signing up the Royal British Legion to prepare Team UK for the next five years would put the British preparations on a sounder financial footing.

An MoD spokeswoman said: “The Royal British Legion was able to offer secure funding, more personnel to support the team and a commitment to supporting Team UK into the future.

"We therefore felt this would be the best choice for Team UK. Our priority is always to ensure Team UK and our wounded, injured and sick service personnel and veterans get the best experience."

She added: “We remain enormously grateful for all the work Help For Heroes has done to take Team UK to the Invictus Games and continue to work with them to support the Armed Forces community.”