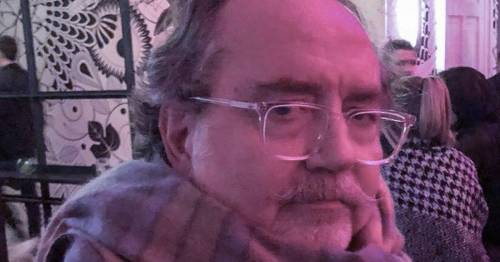 A grandson of one of the Moores brothers behind the Littlewoods Pools empire has won a High Court fight with his brother over part of the family’s billion-pound fortune.

The Moores family, heirs of Littlewoods founders Sir John and Cecil Moores, enjoy a fortune estimated in 2020 at £1.21 billion, amassed through their football pools and mail order retail empire.

Over the years, they have owned both Liverpool and Everton football clubs.

The empire was built from scratch by Sir John, aided by his brother Cecil, with the pair rising from the sons of a bricklayer to having at one point three female family members said to be richer than the Queen.

The company was sold to the Barclay brothers in 2002 for £750 million, leaving many members of the family with vast multimillion pound fortunes.

Matthew Velarde 61 [pictured] was alleged to have been cut out of the inheritance because he had been divorced, sparking concerns his ex-wife would try to claim a share of the money
(

But the grandchildren of Cecil ended up fighting in court over the spoils of a valuable trust fund he set up more than 70 years ago for the benefit of future generations.

His daughter, Patricia Moores, died aged 86 in 2017, sparking a High Court battle involving her three children over who pockets the income from her share of the fund set up by her dad in 1949.

Her elder son, Christian Velarde, 63, claimed their mum intended his younger brother, Matthew, 61, be cut out of the fund because he had been divorced and she was worried that his ex-wife may make a claim to part of the money.

However, Matthew – with the backing of their sister Rebecca – said he was entitled to a third share – around £1.4million – because his mum’s will was clear in setting out her intention to split everything equally.

Last year, a judge at the High Court ruled in Matthew’s favour.

Christian appealed this but on Wednesday, a judge dismissed his appeal, meaning Matthew is entitled to a third share of the valuable fund, known as the Patricia Trust Fund.

Judge Ashley Greenbank ruled that the previous judge, Deputy Master Martin Dray, had not been wrong in finding in Matthew’s favour.

During the hearing of the appeal in November, Christian’s barrister, Penelope Reed QC, said Mrs Moores had originally intended to split the fund between her three kids.

But in 1997 – amid Matthew’s divorce – she performed a u-turn, appointing only Christian and Rebecca as beneficiaries of the fund.

The siblings’ fight was sparked by her final will, signed in 2007, which split all of her worldwide assets – apart from specific gifts – equally between her children.

It was 1923 when John Moore and his brother Cecil, the two sons of a bricklayer from Lancashire, came up with the idea to launch pools betting
(

The estate was worth £40 million at the time of her death, but that value did not include her entitlement to income from the trust fund, the court heard.

Rebecca received an art deco diamond bracelet set in platinum, diamond and pearl earrings, a diamond fern and flower broach and a Leo medallion in gold and silver, while five grandchildren were also left specific gifts of jewellery, plus £1 million to split equally between them.

A single clause of her will however led to the brothers’ court fight. It states: “I leave devise bequeath and appoint the whole of my real estate and the rest residue and remainder of my personal estate…unto my children Peter Christian Velarde, Matthew Julian Velarde and Rebecca Velarde.”

By 1982, Littlewoods Pools was the largest private company in Europe and the largest family-owned firm in the UK

Matthew said that meant she had revoked her 1997 appointment of his siblings as the only beneficiaries of the fund, for which no value has been disclosed.

But appealing, Ms Reed, on behalf of Christian, argued that that was not enough and that she would need to have specifically revoked the 1997 decision if she wanted to include Matthew as a beneficiary.

Handing Matthew victory Judge Greenbank said: “Having considered all the issues raised in the grounds of appeal, I am not persuaded that, on the facts of the case, the decision of Deputy Master Dray was wrong.”

The decision means that as well as getting a third share of their mum’s £40 million estate, Matthew is entitled to an equal share of the ongoing income from his mother’s trust fund.

Patricia Moores – who died at her £2 million six-bedroom Isle of Man home, which was set in 2.8 acres, with a pool and separate staff quarters – had reportedly received £25 million from Littlewoods’ sale in 2002.

The company was built by the Moores brothers, who were later immortalised in bronze as statues in Liverpool, where the pools company was founded, and Sir John had the city’s John Moores University named after him.

Previous : How much you’d save on energy bills if the government axed VAT on gas and electricity
Next : Stephen Hester’s Nordic job is his least dramatic