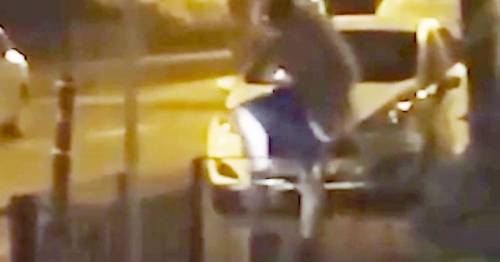 A hedgehog was deliberately “stomped” into a drain before being found by horrified residents.

An investigation is now underway by the Scottish SPCA (SSPCA).

It was alerted to the barbaric incident which took place in Edinburgh on Monday night, reports the Daily Record.

CCTV footage from a nearby camera allegedly captured three youths in the area at around the time of the attack.

It is claimed the attack was carried out by one of the youngsters.

Concerned residents discovered the critter curled up inside the drain and called in the animal charity to help.

Unfortunately, the hedgehog had died before being recovered at the scene on Tuesday by the SSPCA.

An investigation into the attack is now underway
(

A post on social media by the Find Jeff animal group read: “I am absolutely shocked at what has just been sent to me by a friend.

“Security camera footage of 3 young lads, one of whom can be seen on a bike, late last night, possibly around midnight but time still to be confirmed.

“One of the lads, wearing what looks like a hoodie or sweatshirt, possibly grey, quite a well-built lad, stomping on something into a drain.

“The same lad can be seen lifting the drain cover. Transpires that this was a little hedgehog that has been visiting the area for the past 4 years.

“The footage has been passed to the SSPCA as this is a horrific act of needless cruelty and a Wildlife Crime Act too.

“Totally unacceptable and very disturbing to know the likes of these humans are in our communities.”

Horrified residents found the hedgehog after the attack
(

They later added: “SSPCA attended and with the help of a local resident, they managed to free her.

“She has sadly passed away. It is believed by locals that she was the large female they have had the pleasure of visiting their gardens for abt 4 years now.

“She may have babies nearby. If anyone finds any young Hoglets out during the day, please get in touch.

“Residents and ourselves would be happy to take them to Forth Hedgehog Hospital for specialist care.

“This is such a heartbreaking situation and we have been inundated with messages, some of which contain information that may help trace the abusers…so fingers crossed justice prevails.”

The animal charity confirmed they are investigating the circumstances surrounding the hedgehog's death.

SSPCA senior inspector John Toule said: “We can confirm we collected a deceased hedgehog from the Niddrie Mains Road area of Edinburgh on 20 July.

‘As this is an ongoing investigation we are unable to comment further at this time.”