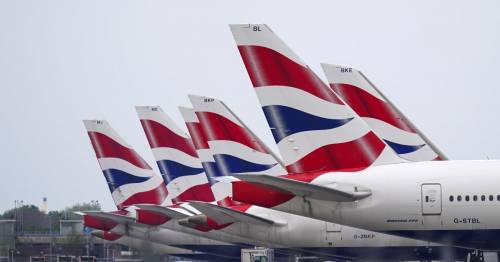 Brits are bracing for more travel chaos after British Airways staff based at Heathrow voted in favour of strikes this summer.

Ground and check-in staff at the London airport voted to walk out in a dispute over pay, the GMB and Unite unions announced, in a move which threatens to bring fresh holiday hell to weary Brits eager for a summer getaway.

And it comes after weeks of carnage and misery at airports across the UK and as strikes by union RMT once again ground railways to a halt today.

BA members working at Heathrow Airport were balloted by the GMB trade union on Thursday morning, with the union announcing shortly after that 95 per cent of its workers had voted in favour of strike action this summer.

The union said strike action was likely to be held during the peak holiday period, warning of a summer of strikes.

Workers, including check-in staff, will now decide on strike dates.

BA workers at Heathrow who are members of the Unite union have been balloted too, separately. Results from this were expected on Monday.

“BA have tried to offer our members crumbs from the table in the form of a 10% one-off bonus payment, but this doesn’t cut the mustard.

“Our members need to be reinstated the 10% they had stolen from them last year with full back pay and the 10% bonus which other colleagues have been paid."

British Airways has his afternoon said it was "extremely disappointed" by the result of the ballot.

"We're extremely disappointed with the result and that the unions have chosen to take this course of action," a spokesperson said in a statement.

"We are fully committed to work together to find a solution, because to deliver for our customers and rebuild our business we
have to work as a team."

But Ms Houghton said GMB members at Heathrow had suffered "untold abuse" as they dealt with the travel chaos caused by staff shortages and IT failures.

At the same time, they had their pay "slashed" during BA's callous fire and rehire policy, she added.

“What did BA think was going to happen?

“It’s not too late to save the summer holidays – other BA workers have had their pay cuts reversed. Do the same for ground and check-in staff and this industrial action can be nipped in the bud.”

Unite officer Russ Ball said: “The problems British Airways is facing are entirely of its own making. It brutally cut jobs and pay during the pandemic even though the Government was paying them to save jobs.

“In the case of this dispute, they have insulted this workforce, slashing pay by 10% only to restore it to managers but not to our members.

“BA is treating its loyal workforce as second class citizens and they will not put up with it a moment longer.

“Strike action will inevitably cause severe disruption to BA’s services at Heathrow.

“The company has a short window of opportunity to reinstate our members’ pay before strikes are called. I urge BA not to squander that opportunity.”

Members of the GMB voted by 91% in favour of industrial action while Unite said 94% of its members backed action.

Airports across the UK have already been thrown into turmoil in recent weeks, as families tried to jet off on half-term holidays amid industry staff shortages and flight cancellations, leading to pandemonium.

The likes of TUI, easyJet, Jet2 and Ryanair have been opening baggage drop-off desks hours early in an effort to curb some of the congestion.

And news of another possible strike action comes amid the UK's biggest rail strike action since 1989, with around 50,000 Network Rail workers walking out this week in a dispute during a cost of living crisis.

Members from the Rail, Maritime and Transport (RMT) union are in the process of a mass walkout due to a pay and pension dispute this week, causing major disruptions to rail networks.

RMT general secretary Mick Lynch said before the action: "Railway workers have been treated appallingly and despite our best efforts in negotiations, the rail industry with the support of the government has failed to take their concerns seriously."

Workers are walking out amid a pay dispute during a cost of living crisis. The Bank of England predicts inflation will hit 11% this year.