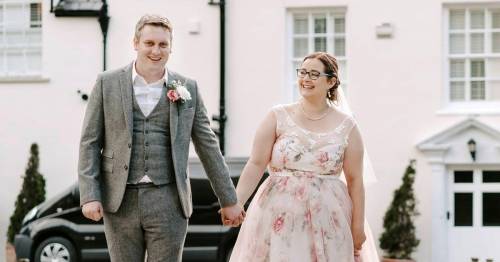 A couple who were killed as their children, aged six and five, slept upstairs had been involved in a parking dispute, neighbours have claimed.

Ex-Commando Collin Reeves, 34, is being held on suspicion of murdering Jennifer Chapple, 33, and husband Stephen, 34, in Norton Fitzwarren, Somerset.

As film emerged of Jennifer in a door- step argument, Chief Insp Justin French said: “There had been callouts in the past.”

Doorbell film shows tragic Jennifer in a verbal bust-up outside her house just weeks before she was stabbed to death.

The grainy footage, which she sent to a friend, shows her being confronted by a man, who shouts: "F***ing gobbing off.”

Colin Reeves, 34, has been arrested on suspicion of murder

He unleashes a tirade of expletives before she goes into the house and he walks away, still swearing.

On Facebook in February, Jennifer, described today as a “lovely, kind-hearted lady” said: “Don’t let the ugly in others kill the beauty in you.”

Jennifer and her husband Stephen were found dead in their home in Norton Fitzwarren, Somerset, on Sunday evening. Their children, boys aged six and five, were unharmed but “distressed” inside.

Police, who said the children had been asleep at the time of the attack, confirmed Jennifer had died from stab wounds, while post mortem examinations were still being carried out on her husband.

Dad-of-two Collin Reeves, 34, a former Commando Royal Engineer who was arrested on suspicion of murder on Sunday, was being questioned tonight after magistrates granted an extension to the custody time limit.

A man of 67 was also arrested on Sunday but released under investigation.

Avon and Somerset Police said the incident on the Dragon Rise estate would be referred to the policing watchdog due to “prior police contact with those involved”.

Neighbours said police had been called over parking disputes. One resident said: “Police have been out there on at least three occasions because of the parking, it’s utterly ridiculous.”

Another resident, Melissa, said: “Everyone has an issue with parking around here. Some people have multiple cars there isn’t space for and it has caused a lot of upset.”

Flowers laid at the scene for the Chapples paid tribute to “genuinely lovely people”. A resident named Barbara, 40, said: “Whenever I saw Jennifer she was ever so friendly and was always smiling.

Police continue their investigation at houses in Norton Fitzwarren
(

“They will both be dearly missed.”

Jennifer worked at the Otter Garden Centre at Pen Elm, near Taunton.

Manager Rob Brooks said: “She was a well-loved and respected member of the team, a lovely, kind-hearted lady and a devoted mother.

“It’s still raw at the moment for all the staff. Our hearts go out to those children that are left behind.”

Stephen was an IT teacher at West Somerset College.

Headteacher Gregg Mockridge said: “Steve was a fantastic colleague, a brilliant teacher who cared deeply about the students in his care.”

Previous : Sickening video shows prisoner beaten unconscious with broom and microwave
Next : Couple ‘so grateful’ for stranger’s act of kindness for upset kids after Liverpool match