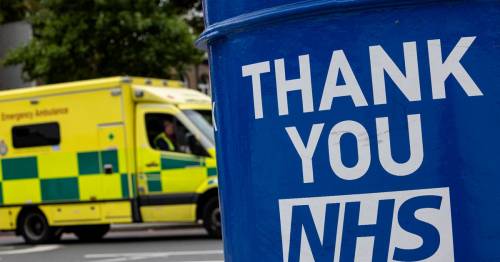 MPs are voting tonight and tomorrow on an NHS shake-up that has prompted fears about what the NHS will look like in future.

But experts have warned it could be a power grab for Health Secretary Sajid Javid, and doesn’t do enough to tackle the staffing crisis.

Meanwhile anti-privatisation campaigners claim it could entrench the role of private sector firms in the NHS.

Campaigners and experts are split over exactly how big a risk there’ll be from private companies, which can sit on new bodies and have contracts without tender.

In the summer Labour's Zarah Sultana branded the reforms the "NHS corporate takeover Bill”. This was branded “complete nonsense” by Health Secretary Sajid Javid, and the idea of a power grab by private firms has been largely dismissed by the Nuffield Trust and King’s Fund.

But the protests have grown. Labour MP Richard Burgon and Cat Hobbs of We Own It brand the Bill “a charter for corruption”, adding: “The dodgy allocation of contracts we have seen throughout Covid risks becoming the norm.”

Unite have also branded it an “NHS privatisation Bill”, with general secretary Sharon Graham saying it will be “used to further run down the NHS and to bring in more privatisation by the back door.”

The union brought together campaigners and celebrities at a rally outside Parliament tonight, while groups including Keep Our NHS Public handed in a 300,000-strong petition against the Bill.

Jacalyn Williams, national officer for health at Unite, claimed: "The government’s new Health and Care Bill is a Trojan horse for more cuts and cronyism and is a licence for politicians to run down and sell off our NHS.”

So what is it actually about, and why is it worrying so many people on the left? We had a go at explaining it.

What will the Bill do?

The Bill will get rid of 100 or so Clinical Commissioning Groups which decide how local NHS services are provided in England.

In their place will be Integrated Care Systems (ICSs) in 42 regions of England, controlling purse strings and setting five-year plans.

The Bill will also formally merge NHS England and NHS Improvement, and end the automatic requirement to put all health contracts out to tender.

And it includes plans from a February 2021 White Paper to give the Health Secretary direct power over some aspects of health services and NHS England.

Its supporters, including the NHS leadership, believe it will undo some of the changes brought in by the Tories’ disastrous 2012 reform law.

This emphasised “competition” between areas of health and social care and ushered in an era of tendering where private firms provided more NHS services.

The Kings Fund “strongly welcomes” the move away from competition towards collaboration.

So why are these things controversial? Read on…

Campaigners are angry that ICBs can include representatives of private health firms, as well as NHS clinicians and council public health leaders.

The boards decide what healthcare local groups of people will and won’t receive, what services are kept open, which are shut or scaled back or ‘digitalised’.

In a compromise, Sajid Javid has proposed to stop private sector representatives joining these boards – but not completely.

Under his plans, appointees will only be blocked if they “could reasonably be regarded as undermining the independence of the health service”.

Labour say this doesn’t go far enough and all private representatives, apart from GPs, must be blocked. The BMA has also raised concerns.

Labour’s Jon Ashworth said: “In Bath, in Somerset, we have seen Virgin Care get a seat on the shadow ICS. [Labour] think that is unacceptable.”

Richard Burgon and Cat Hobbs added the Bill “entrenches an even greater role for private companies in our NHS, one where private companies not only profit from people’s ill health but increasingly get to decide who gets what treatments and when”.

Helen Buckingham of the Nuffield Trust disagreed. She said in summer “there will be quite a few other people around that table too – NHS leaders, local authority leaders and independent non-executives. Meetings will be held in public and decisions must be transparent.”

She added spending on non-NHS organisations, which include charities and councils, is “actually lower now than in 2015/16”, and the Nuffield Trust is “not really concerned” that the Bill opens the door to privatisation.

Not all services going out to tender

The changes will also do away with the need for public tendering processes for who carries out NHS work.

This could lead to more existing outsourced work carried out by firms being “rolled over”, entrenching the role of the private sector.

It’s a bid to cut red tape if, say, an established local body is doing the job well. The NHS will only have to tender services where it can lead to better outcomes.

Competitive tendering allowed Virgin Care to sue the NHS. But there are fears ending it could be hijacked.

The Nuffield Trust insists this won’t lead to ISCs “handing contracts to their chums”, but says “it will become easier not to open contracts up to the market”.

The BMA however warned the rules “allow contracts to be awarded to private providers without proper scrutiny or transparency”.

The Kings Fund says: “Rather than contracts being awarded to new providers without sufficient scrutiny, we believe the greater risk is that contracts are automatically handed out to incumbent providers irrespective of their performance.”

And Labour’s Jon Ashworth said: “We are worried about further cronyism.”

A ‘power grab’ by the Health Secretary

Labour, the Kings Fund and the Nuffield Trust have united in criticising new powers for the Health Secretary in the Bill.

Currently, controversial changes to NHS services can be referred to government. But in future the Health Secretary can intervene in minor local plans at any time.

Labour’s Jon Ashworth has branded the Bill a “Trojan horse to hide a power grab by the Secretary of State”.

And the Nuffield Trust warned ministers will “feel pressure to distort decisions about services, staff and treatment to meet political goals”.

The Kings Fund added it could cause a “logjam” of decisions in the Health Secretary’s in-tray. The think tank added: “It risks bringing political calculations into decisions that should be made on the basis of patient need.”

Labour have tabled an amendment to delete this clause entirely – but Tory ministers have resisted it.

With 42 regions, the new ISCs will be covering far bigger areas in some cases than the CCGs that came before them.

Some MPs have raised concerns about whether this will end up with boundaries that look sensible on a map, but make no sense to local people.

The Nuffield Trust warned in the summer: “By splitting the NHS into larger areas, the calculation that steers money to areas who need it more will be less precise. There is a risk that small areas with higher needs will lose out.”

Some experts fear the wording of the bill waters down the NHS’s legal obligation to provide healthcare for the population.

Its performance target framework will scrap the key 18-week minimum for waiting times, among others.

It also appears to give the health secretary the power to water down the requirement for staff to be properly trained and qualified.

The Kings Fund has raised fears that the Bill is too “weak” to tackle chronic staff shortages.

It pointed out the Bill will force the Health Secretary to report “at least every five years” on workforce needs, which isn’t often enough.

Sajid Javid “could wait until 2027 to produce such a report”, it added – and called for new duties to be added to the Bill.

Why is it all happening now with Covid?

The changes are planned for 2022, but the Nuffield Trust says this is “unrealistic” while the NHS is still reeling from Covid-19 with massive waiting lists.

Reforms also cost money in themselves and could distract managers who are trying to get through the surgery backlog.

Sajid Javid insists: “This is exactly the right time for these reforms.”

But Labour’s Jon Ashworth said in the summer: “This is the wrong Bill at the wrong time.”