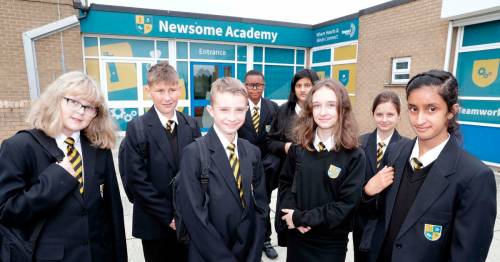 Headteacher ‘breaking down barriers’ with amazing uniform policy at school

A headteacher says his school is "breaking down barriers" after pupils returned for the first day of term – kitted out in free uniform.

Every student at Newsome Academy in Huddersfield, West Yorkshire, has been given new attire for the upcoming academic year.

The offer includes complimentary blazers, jumpers and ties – as well as new equipment like a bag, pencil case and clipboard.

Each year group has been allocated a different coloured tie and students have also been given the choice of wearing a blazer, jumper or both.

Headteacher Dean Watkin said the school had taken the decision in order to save families time, money and energy.

He told YorkshireLive said: "Obviously there is a discussion around the cost, and I absolutely agree, it is costly to buy uniform.


"We are wanting to do some really exciting things this year and it's about breaking down those barriers. So, we are supporting our families and our community by picking up that cost because we want students to succeed.

"We are saving time and energy and getting straight on with 21st century learning."

The school said another key factor in the decision was making sure that students had options when it comes to deciding what to wear.

Mr Watkin said: "There's often national debate around uniform and the cost of it, but also on the lack of options.

"We have supplied families with a jumper and a blazer. Students can wear both, just the blazer or just the jumper. With Covid and ventilation we want to ensure that students are warm.

"That has gone down really well because they get freedom in choosing which items they want to wear."

He continued: "The main thing people have said is: 'It's saved us a lot of hassle and a lot of money'.

"I was having a conversation with a parent via email and they rightly mentioned that it will reduce potential bullying issues now that students no longer have different items that may or may not stand out for different reasons."

Asked how the school has funded the gesture, Mr Watkin said: "We have made various changes and updated the finance arrangement which means that we can now invest that money back into the community, which is what we are trying to do."

Every student has also been gifted a clipboard as the school begins to introduce university-style morning seminars.

The move coincides with a new £5m investment at Newsome Academy.

The money, granted by the Department for Education, will go towards new classrooms, WiFi and more.

Extensive building work is expected to be ongoing at the school throughout the year.

Mr Watkin said: "We look forward to introducing some really quirky and cutting-edge facilities for students."

Previous : Virginia and Wisconsin report measles cases among refugees
Next : British judge ‘could force Prince Andrew to testify in UK over US sex assault lawsuit’