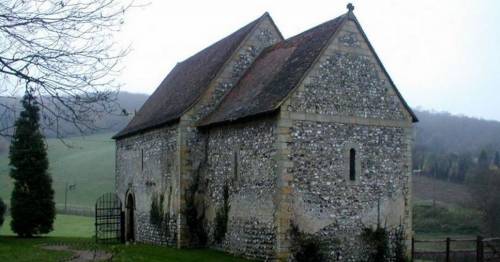 A church 'haunted' by the ghost of a seven-year-old girl is all that is left of an abandoned UK village which had its population wiped out by the Black Death.

Dode lies in the heart of Gravesham where only the Church of Our Lady of the Meadows remains after its tragic past with the story passing down through Kentish folklore of how it was wiped out.

The fine looking medieval church is now used as a wedding venue and it hides the secret of its past and the horror of the Black Death that struck 600 years ago.

Dode was built at some point between 1087 and 1100 during the reign of William II of England, reported KentLive.

It was built on top of an ancient man made mound that it is now known as Holly Hill, as opposed to 'Holy' due to the hamlet's nefarious reputation.

Eerily, the church is built upon a confluence of Ley lines – magnetic 'lines' in nature" that birds, mammals, insects and bacteria use to migrate long distances.

The point where the lines meet often produces a measurable energy vortex, which has led certain religions to consider these areas sacred.

The stone Norman church is all that remains of the village, after its population was wiped out in 1349 in the Black Death, and it is accessed by a single road, Wrangling Lane,

Myth has it that the villagers sheltered in the church during the outbreak and succumbed as they awaited rescue.

It is said that the last survivor of the Black Death at Dode was a seven-year-old girl known as the Dodechild who died in the church.

The Dodechild is supposed to haunt the churchyard, though sightings are scarce.

In local superstitions she would supposedly appear on the first Sunday morning of every month but as nobody who inhabited the village survived the plague, it was believed that the area was cursed.

The church was deconsecrated and was boarded up in 1367 by the order of Thomas Trelleck, the Bishop of Rochester and it remained empty for 650 years.

The church has also become notorious for black magic rituals.

Another legend stated that the well next to the church was bottomless but this was proved to be false in 1996 when a team from Kent Underground Research Group measured it to be 35ft deep.

Holly Henge is the name given to the stone circle at Dode which is said to evoke the spirituality of the centuries that have passed.

Timeless rites of passages take place within the circle, such as baby naming events, which are witnessed by the centuries of time that "go beyond Dode and on to eternity".

The Handfasting ceremony has roots to Ancient Celtic Tradition and goes back as far as 7,000BC.

It involves a couple that have their hands bound by cords, where they then exchange gifts within Holly Henge.

The church was eventually bought again in 1990, by Dough Chapman, a chartered surveyor who worked at Canterbury Cathedral.

Over the next couple of decades, Doug painstakingly restored the church's interior to how it would have looked in its original state.