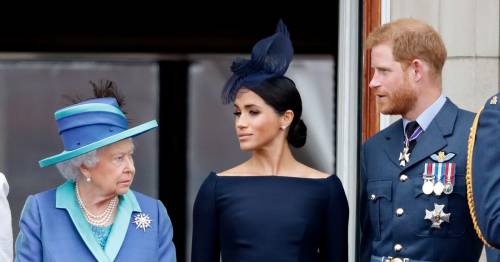 Prince Harry and Meghan Markle are in danger of becoming the "focus" of the Queen's Platinum Jubilee, a royal expert has warned.

The Duke and Duchess of Sussex have been banned from the Buckingham Palace balcony during the monarch's birthday parade, it was announced yesterday.

However just moments after the announcement, Harry and Meghan declared they would return to the UK to celebrate the Jubilee after months of speculation.

Some royal experts have now warned their presence could overshadow the events organised in Her Majesty's honour.

Royal author Angela Levin said on Twitter: "The atmosphere will be different with Harry etc coming to Jubilee.

"The focus will be on them and how they behave, which the Jubilee shouldn't be about. Unfair to expect senior working royals to force themselves to put on a happy face."

According to Mail Online, commentator Richard Fitzwilliams added: "It is the Queen's wish that they attend.

"Although when they planned to do the Oprah interview they didn't know Prince Philip would be ill, they nonetheless went ahead. That won't be forgotten.

"But the Queen wants the family to put on a united front. A huge amount has gone on behind the scenes to achieve this."

The monarch’s decision to only include royals carrying out official public duties on the balcony at the Trooping the Colour was taken “after careful consideration”, Buckingham Palace said.

Levin called the decision "great", adding: "It will have such a different positive atmosphere if there are working royals who support Her Majesty."

However despite the seeming snub, Harry and Meghan have confirmed that they will come to the UK to attend the Jubilee celebrations this summer and will also bring their children Archie and Lilibet – who has yet to meet her great-grandmother.

A spokesperson for the couple said: "Prince Harry and Meghan, The Duke and Duchess of Sussex are excited and honoured to attend The Queen’s Platinum Jubilee celebrations this June with their children."

It will be the first time Harry and Meghan have brought their family to the UK since leaving for the US.

On June 2, Trooping the Colour – the sovereign’s official birthday parade – will kick start the four days of Jubilee festivities, with 18 members of the royal family set to gather on the famous frontage, with the Queen “looking forward” the weekend of celebrations.

A Palace spokesman said: “After careful consideration, the Queen has decided this year’s traditional Trooping the Colour balcony appearance on Thursday, June 2 will be limited to Her Majesty and those members of the royal family who are currently undertaking official public duties on behalf of the Queen.”

Also set to appear for the historic occasion will be Prince George, Princess Charlotte and Prince Louis and the Wessexes’ children Lady Louise Windsor and James, Viscount Severn.

The head of state has made an exception for Anne’s husband Vice Admiral Sir Tim, who is not a working royal, her two youngest grandchildren Lady Louise and James, and her Cambridge great-grandchildren George, Charlotte and Louis.