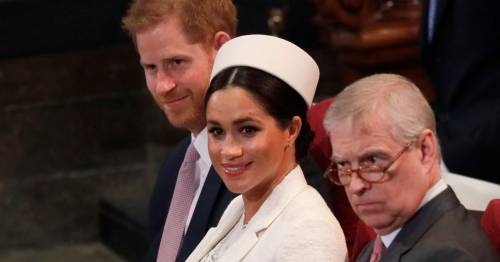 A Netflix crew following Prince Harry and Meghan Markle will be stopped by palace enforcers if they attempt to film the Platinum Jubilee, it is claimed.

Insiders reportedly fear tension could "explode" if the streaming service tries to "exploit" the event next month.

Harry and Meghan will return to the UK for the monarch's celebration, which marks her 70 years on the throne.

But it is feared that their £112 million deal with Netflix could cause problems if crew members "push it" to get access other royals are not comfortable with.

Yesterday it was announced that the couple would be barred from the Palace balcony for the Trooping the Colour ceremony because they are not working royals.

They will join Prince Andrew on the sidelines after he was stripped of duties amid allegations of sex abuse.

Harry and Meghan have agreed a multimillion pound deal with Netflix
(

A palace insider told The Sun : “While the family are delighted Harry and Meghan are coming, there is a real fear of tension, especially over any Netflix crew.

"There are concerns tension could explode if the Netflix team comes to the UK and tries to exploit their opportunities.

“The worry is they will push it and try to gain access to areas of Jubilee celebration events where they can film Harry and Meghan and their children."

The source added that even if the Netflix team isn't allowed into Buckingham Palace, they could still cause a "major distraction".

Courtiers are said to believe that the streaming service will view the Jubilee as "one big opportunity" to exploit the huge agreement, so a team of aides "will be on standby".

The source said that palace staff will act as "minders" if needed to keep camera crews at bay.

Harry, 37, and Meghan, 40, are set to attend with children Archie and Lilibet – the younger of who has yet to meet the Queen.

It has been revealed that she is limiting the balcony appearance after the special Platinum Jubilee event to working royals only.

The monarch’s decision to only include royals carrying out official public duties was taken “after careful consideration”, Buckingham Palace said.

A spokesperson for the couple said: " Prince Harry and Meghan, The Duke and Duchess of Sussex are excited and honoured to attend The Queen’s Platinum Jubilee celebrations this June with their children."

It will be the first time Harry and Meghan have brought their family to the UK since leaving for the US.

Insiders are reportedly anxious that Netflix crews could be a "distraction"
(

On June 2, Trooping the Colour – the sovereign’s official birthday parade – will kick start the four days of Jubilee festivities, with 18 members of the royal family set to gather on the famous frontage, with the Queen “looking forward” the weekend of celebrations.

A Palace spokesman said: “After careful consideration, the Queen has decided this year’s traditional Trooping the Colour balcony appearance on Thursday, June 2 will be limited to Her Majesty and those members of the royal family who are currently undertaking official public duties on behalf of the Queen.”

Previous : Mum offers strangers $1,000 to catch flight – but you won’t be able to relax – World News
Next : Areas still waiting for £150 council tax rebate will get it within DAYS – full list