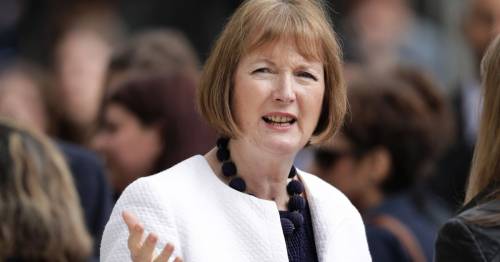 Labour's Harriet Harman has opened up about the grief of losing her husband and renewed calls for the party's next leader to be a woman.

The long-serving MP was left heartbroken Jack Dromey – the fellow MP to whom she'd been married for almost 40 years – died suddenly six months ago.

Speaking exclusively to GB News, the 71-year-old MP for Camberwell and Peckham said the loss of her spouse came "out of the blue" and has left her grappling with a "real mystery" about how to "go forward" as she prepares to stand down at the next election.

“I feel that widowhood is something that happens to most women who’ve married or have got a partner, widowhood does happen to them," she said. "But there’s a real mystery to me in terms of…how do you kind of go forward in your life?

“And we’ve always argued you can’t just define yourself by the man that you’re with. But it is a huge change if you’ve kind of more or less developed with somebody and your whole lives are intertwined, and then suddenly they’re not there anymore.”

Harriet Harman with her husband Jack Dromey in 2015
(

She married Mr Dromey, a former deputy general secretary of the TGWU and MP for Birmingham Erdington, in 1982 but he died unexpectedly from heart failure in January.

“I’m like cracking on…I know that that’s what Jack would be wanting me to be doing.

“I’ve got lots of blessings in my life so I must count those.”

The MP, who has twice stepped up to act as Labour's leader, said it was "embarrassing" that the party has failed to elect a female leader in its 122-year history.

She said: “As and when we do in the far distant future have a leadership election, it has got to be a woman the next time round because it’s just downright embarrassing that the Conservatives have had two and we haven’t even had a woman leader in Opposition, let alone a woman Prime Minister.

She said: "They not only changed the face of Parliament, Labour and the public policy agenda, but they also prompted a change in the Conservative Party because they looked terribly old fashioned when their benches were all men in grey suits.

“And the argument is that legally, because we are at 50%, we can no longer do it. It’s about redressing inequality and you can’t do it if you’ve reached that equality. But actually, we could still do it and I think we should.

"Not least for example, in one region, in the South east region outside London, where only two of our eight MPs are women. So, at the very least there’s an argument for doing it there. And I think you do have to be careful because you can always slip back."

Ms Harman also told GB News why she never ran for leader of the Labour Party despite her high profile.

“It just sounds so pathetic, but I felt that I had the confidence within the party, but I had such a battering in my political journey that I just didn’t feel that I could take the Labour Party from that transition from opposition into Government,” she said.

“Partly because I’d always been challenging, challenging the press, challenging everybody and demanding progress, and that doesn’t make you very ‘leadershipy’ it makes you more like an outsider and a challenger.

“There was an absolute swarm of men going for it, and I just thought ‘well it might be him or it might be him’, and I sort of screened out those people who said, ‘you should be doing it’.”

Ms Harman was also asked why she thought Labour had failed to win a general election since Tony Blair had led the party.

She said: “I think the lessons we can learn are from where we actually went right, which was in 1997, and then those subsequent elections, were actually when we came to terms with the fact that you have to listen to what the voters are saying to you, and that you cannot tell them that they’re wrong.

“There used to be a jokey saying on the left, ‘no compromise with the electorate’.

“Well, if you don’t compromise with the electorate, and listen to what they’re saying, they don’t vote for you.”

She added: “It’s all about listening to what people want and taking that on board, you still have your Labour principles, your Labour values, but you have to put those principles and values in the context of where people are with their lives.

“And that was really the kind of genius of New Labour. I mean it sounds rather basic, but it was a big transformation, instead of us waiting for the public to ‘wake up’ because they were just so wrong and so stupid to keep voting Conservative, we were like, ‘hmmm, perhaps the problem is with us, and perhaps we need to change’.

Despite the shock of grief, Ms Harman said she felt energised by what lay ahead in life.

“What I’m finding quite energising is the issue of the kind of ‘feminist journey’ into ageing,” she said. “Because there’s been a thing whereby when you’re younger in politics you’re kind of ‘too pretty’, ‘distractingly attractive’, ‘too young’.

"Then, when you’re a bit older and you’re having your children it’s ‘too many children’, ‘hands full’, ‘just can’t hack it’, ‘too preoccupied’. And then when you’re older you’re ‘past it’, and you never seem to have your prime.

"Whereas with men, when they’re younger they are ‘up and coming’, ‘somebody to watch’, ‘dynamic’. Then, when they’ve got loads of children, they are ‘reassuringly virile’. And then when they’re older and grey, that’s ‘wisdom’, a bit of the ‘George Clooney silver fox’ kind of thing. And they seem to have their prime all the way through, and us women struggle to have our prime at any time.

“So, I’m now firmly deciding that I’m in my prime and I’m embracing ageing, so I’m positively going grey and thinking that there’s nothing wrong with being older. In fact, because you know a load of things and you’ve experienced a lot of things, and you’ve got a different perspective, age can be a superpower not a disability, even for a woman.

"And yet we’re all supposed to be trying to look younger, trying to make our hair look like it did when we were 30, trying to wear clothes that make you look young and as if you’re a reproductive prospect. The point is to have a sort of meaningful existence which doesn’t depend on all of those things. So, it’s a bit of a new frontier really, with lots of feminists of my generation who have got to my age and we’re now crafting the journey into feminism ‘age wise’.”

Previous : Passenger desperate as mum’s ashes are lost in Heathrow’s chaotic ‘luggage pile’
Next : Labour MP Apsana Begum signed off sick from work due to campaign of misogynistic abuse