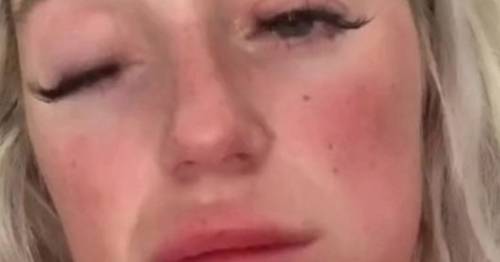 A woman has revealed half of her face became paralysed after going to Turkey to get veneers on her teeth.

TikTok user @lydiahughes22 claims she was left with Bell’s Palsy, a medical condition that causes temporary muscle weakness on one side of the face.

She shared a video on the social media app showing photos from before and after her paralysis set in.

The video, which has been seen more than 755,000 times, shows how one side of the face looks droopy after the procedure.

Many viewers were left shocked by the TikToker's experience, and some said it made them think twice before getting similar treatments.

One said: “This will put you off getting them done in Turkey.”

Another wrote: "But how?! What happened?!

"I'm so sorry you're going through this sweet. I'm about to get mine done. Should I cancel?!

Bell’s Palsy is the most common cause of facial paralysis.

However, it is still considered rare as it affects one in 5,000 people a year.

It happens when the nerve that controls facial muscles becomes inflamed or compressed.

It is usually caused by an infection and cannot be prevented, according to the NHS.

It could also be linked to the herpes virus.

The NHS website explains you usually get Bell's Palsy once, but it can come back.

Most people make a full recovery after nine months, but signs of improvement can appear after three weeks.

Bell's Palsy is treated with a 10-day course of steroid medicine, eye drops and eye ointment to stop the affected eye drying out and surgical tape to keep the eye closed at bedtime, according to the NHS website.

In rare cases, the facial weakness is permanent.

The NHS advises that if you experience facial weakness or paralysis it can indicate a more serious condition, such as a stroke – so call 999 or visit your nearest A&E department immediately.

Previous : Social care: Search how your MP voted on care cap ‘con’ that affects poorest
Next : Amazon workers ‘treated like slaves and robots’ as ambulances called to centres 971 times