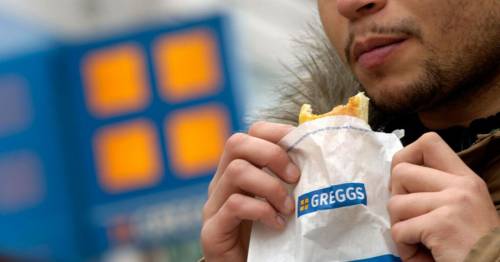 Greggs to open 150 new branches this year after selling £1.2bn worth of pastries

Bakery chain Greggs has said it plans to open 150 new branches this year after a bumper 12 months – despite losses in response to the supply chain crisis.

The food giant today said stores saw "a strong performance in October” adding sales in the 12 months of 2021 hit £1.23 billion.

"We have a strong pipeline of new shop opportunities and expect to open around 150 net new stores in the year ahead, in line with our stated strategy," a stock market announcement said.

Over winter, consumers snapped up 6.7 million mince pies with its vegan festive bake the second top-seller.

But boss Roger Whiteside warned that while sales across its 2,181 stores remain strong, supply chains are still strained and inflation remains high.

In December, the business was forced to pull breakfasts and sandwiches from menus due to a shortage of ingredients.

"As expected, inflationary pressures increased towards the end of 2021 and are likely to remain elevated in 2022," he said.

On a two-year like-for-like basis, with new stores not included in the data, sales were down 3.3%.

The chain said supply chain issues will continue this year
(

Mr Whiteside said: "We enter 2022 with a strong financial position that will support our ambitions to accelerate the rate of growth in our shop estate whilst developing new digital channels and extending the trading day.

"Whilst conditions in the first few months of 2022 are likely to remain challenging, we are confident that we are well placed to make progress on the many attractive opportunities that lie ahead."

The chief executive also announced his plans to leave the retailer after nine years at the helm.

New rules for traders and hauliers who move goods into Great Britain from the EU came into force on Jan 1 2022.

There is still time to take action and keep your business moving.

There is plenty of support on offer and the Government is ready to help you navigate your way through these new changes.

Visit GOV.UK/Brexit to prepare for the new rules today.

Roger Whiteside said he will step down at the company's annual shareholder meeting in May but will remain as an adviser until January next year.

He will be replaced by current retail and property director Roisin Currie, who has been with Greggs for 12 years and was previously an executive at Asda.

Speaking of her appointment, Currie said: "Having been a senior executive in the business for 12 years I understand our values-driven approach and the contribution that our 25,000 colleagues make each day."

"We have created a plan for strong growth and further strategic development of Greggs and I look forward to driving this in the coming years."

Previous : Pensioner sues Asda for age discrimination after bosses asked ‘if she wants to retire’
Next : Australia nears Omicron peak as daily infections hover around records