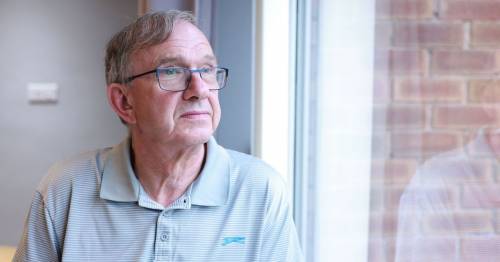 A grandad is "trapped in his own home" by a fatal condition which will soon require oxygen tanks.

Leon Johnson's doctor reckoned he had "smoked all his life" when he began getting short of breath and "couldn't walk very far" in 2017.

But he hadn't and instead his father and grandad smoked openly in their terraced house in Merseyside and black smoke blew back fumes their coal fire.

His hanky also turned black as he breathed into it during the smog of the 1950s.

In England, at least 4,000 people died in England from smoke and fog filling the air before the Clean Air Act of 1956 regulated emissions for the first time.

The 73-year-old retired engineer spent much of his working life amid the smoky machines before PPE and extractor fans became widespread.

His lungs are now wrecked and he struggles to lift a four pint milk bottle in the supermarket due to a lack of oxygen in his blood, reports the Liverpool Echo.

The grandad-of-two from Litherland was diagnosed with chronic obstructive pulmonary disease (COPD), which the NHS describes as a group of lung conditions.

They mainly affect middle-aged and older adults who smoke, which cause breathlessness, a persistent chesty cough with phlegm, frequent chest infections, and persistent wheezing.

Leon said: "Right away I knew my life was shorter, because it's a progressive disease, which will eventually kill you."

He knows the day he'll need an oxygen tanks "is getting closer and closer as time goes by".

Crying and struggling for breath, Leon said: "It's terrible, the thought is always in the back of your mind that, as it progresses, you're going to get worse, even if it's very, very slow.

"It's not fair. I can't understand why people smoke. They don't know what they're doing to themselves."

To avoid feeling breathless, Leon has to keep his house dustless and hide inside, with doors and windows shut, to avoid toxic fumes emitted by cars sat with their engines on during the school run.

Even walking to pick up his COPD medication from the chemist leaves him exposed to air pollution, from cars or from cigarettes smoked outside shops, exacerbating his condition and forcing him to lean against walls for breaks going up the hill.

Air pollution contributes to roughly 36,000 premature deaths a year in the UK.

Up to 3.4 million people in the country have conditions like COPD and asthma – with their symptoms being "triggered by toxic air".

This risks "life-threatening asthma attacks and flare-ups", according to health charity, Asthma + Lung UK. Speaking of his flare-ups.

Leon said: "You think, 'I'm not going to die, am I?', because I'm panicking trying to get away from the fumes."

It affects Leon's ability to exercise, play with his grandkids and even leave his home, with a third of respondents to Asthma + Lung UK's survey saying they don't leave the house when air pollution is high.

Nearly half said it prevents them exercising outside, despite this being vital for managing lung conditions.

Leon said: "It's a lovely day, the air is still. Now if I go out and there's a vehicle pumping out fumes and the fumes just sit in the air, then I have a problem. I've been told by the physio, 'Go for a walk'.

"The problem is, if I go for a walk and the vehicles are out, I just can't breathe – I'm gasping for breath."

Sarah Woolnough, chief executive of Asthma + Lung UK, said: "Air pollution is silently damaging the lives and lungs of millions of people right across the UK – leaving people gasping for breath, putting them in hospital and ultimately cutting lives short.

"It's also affecting the daily lives of people with lung conditions, who in some cases are having to choose between protecting their health and leaving their homes.

Despite this, the Government continues to kick robust national targets for the most harmful types of pollutants into the long grass.

"This is completely unacceptable. We are urging the government to commit to bolder clean air targets in the upcoming Environment Act and to improve air pollution alerts including public awareness.

"Anyone concerned about air pollution can make their voice heard by completing the public consultation form on our website."

With the Government's new air pollution targets not to be met until 2040, Asthma + Lung UK is calling on people to respond to a government consultation on the targets, "calling for them to be met a decade earlier" at the latest.

For more information on the public consultation visit here.

Previous : Stroke victims wait 51 minutes for an ambulance as unions warn of NHS ‘collapse’
Next : Age gap fiancee, 23, insists she’s not a gold digger after falling for millionaire, 56