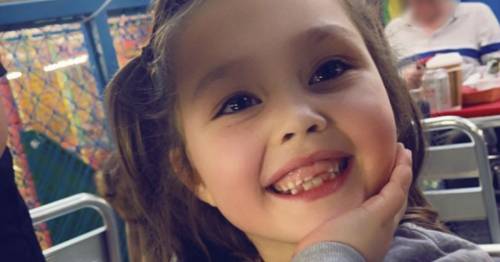 A gran was left red-faced when she accidentally sent her granddaughter to school with an adults-only spoof of a childhood book.

Sue Mackay, 60, innocently brought "Five Get Gran Online" for little Skyla-Rae Muttram thinking it was a Famous Five book to continue a family tradition of reading the books that her mum started years earlier.

She was left horrified when her seven-year-old granddaughter's teacher warned it was "pretty inappropriate for children".

She even wrote a heartfelt note on the front cover: "When I was a little girl these were my favourite books, I hope you enjoy them."

Skyla-Rae brought the book to school on May 10 to enjoy during reading time.

But mum Jade Muttram was shocked when her teacher sent a message saying "the book Skyla brought in to read today was pretty inappropriate for children".

The 33-year-old then flicked through the book and spotted swear words including 'b*****d' and b*****ks' in what she believed to be a wholesome tale from the beloved children's author.

When Jade took a closer look she found that it was a series penned by Brune Vincent imagining the exploits of the Famous Five as adults and drawing on inspiration from the Enid Blyton favourites.

Jade Devon said: "They often take books into school and she took it in on Tuesday to share with her friends in class but it didn't go to plan."

Jade said: "Skyla-Rae ran home with the book [in her hand] and she was waving it in my face and said: 'Mum this looks like an old book but it's not it's a new one and it's inappropriate'.

"The teacher had said it had got swearing in it and my daughter, who is older than her years bless her heart, came in telling me off and gave me a good what for [over it].

"I said 'no it's not what are you talking about?' I still didn't see anything wrong with it until the teacher messaged me that night and I thought I'd better have a look at it."

This is the heartfelt note that was penned by Sue
(

In the exchange with the teacher, she tells the mum she believes it is a "genuine mistake" but said it was a "parody of Enid Blyton".

The mum apologised profusely and the teacher thankfully understood the blunder.

Jade said she hadn't bothered checking the book before handing it over to Skyla-Rae as she believed it to be one of the classic adventure tales featuring Julian, Dick, Anne, Georgina and her dog Timmy.

Jade said: "I didn't look through it, I just didn't think. It's a literal case of 'don't judge a book by its cover' because you never know.

"I was absolutely mortified. You try and shelter your kids from these things and make sure they're protected [and then this happens].

"I rang my mum straight away and she was completely mortified. She rang me and said 'what have I done now Jade? I don't get it' so I explained and she was like 'oh my' bless her heart.

"I'm going to have a little sit-down talk with Skyla-Rae just to see if she has seen any pages and what they said.

"I've definitely learnt not to judge a book by its cover, and I'll definitely be more aware of what I'm buying or what my children are receiving."

Sue said: "I was and still am absolutely mortified. I'll stick to David Walliams in future."

Previous : Family panicking amid three-month delay for passport with just two weeks until holiday
Next : Greg Norman claims ‘we’ve all made mistakes’ in pathetic defence of Saudi human rights record