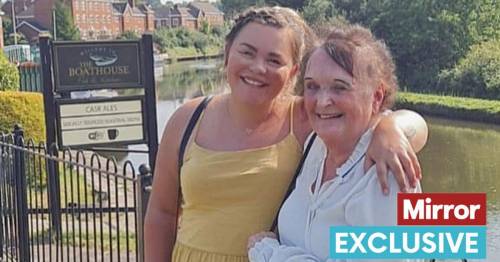 Gran, 77, forced to wait 28 hours for treatment in A&E after fall ‘could have died’

A vulnerable 77 year-old grandmother forced to wait 28 hours to be treated for a nasty gash on her leg 'could have died' after she was put on a ward for Covid patients, her family say.

Jean Cullen was left with a large open wound on her knee after tripping up on a path outside her bungalow in Upholland, Skelmersdale.

The grandmother of five called an ambulance for herself but was told it would be 11 hours before they could get paramedics to her, so was driven by her son to the Royal Albert Edward Infirmary in Wigan, Lancs.

Carer, Chelsea Cullen, 29, claims her nan, who has been isolating for two years as she suffers with bronchitis and Chronic obstructive pulmonary disease (COPD) was immediately put on a Covid ward despite not even being positive for the virus.

Chelsea claimed that when she arrived at the hospital, even though she demanded to have her moved, her vulnerable grandmother had already been exposed to positive Covid patients for six hours.

She believes the long wait and errors in her initial care could have potentially killed her.

Chelsea is a full time carer for her grandmother, Jean
(

“I know they are rushed off their feet but mistakes like that could have cost my nan her life," she said.

The incident comes as the NHS faces an unprecedented combination of winter pressures and soaring Covid infections across the country.

“By the time I was able to get there she had been put onto a Covid isolation ward," Chelsea said.

“I asked the nurse if they had bothered to check her medical records which state that she has COPD and bronchitis and the nurse told me she hadn’t had time to check them and that she was put there because of her temperature.

“I said she probably had a temperature because of her nasty fall and asked her if they had even looked at her knee, to which she replied ‘not yet’.

“She had already been there six hours and they hadn’t even bothered to look at her knee, which they had noted as a ‘minor injury’.

“By the time she was finally seen by a doctor in A&E and stitched up it was 28 hours later.”

She said: “It wasn’t until 6pm that they finally came round with blankets for people."

A spokesperson for Wrightington, Wigan and Leigh Teaching HospitalsNHS Foundation Trust said: “Our emergency and urgent care services are under extreme pressure and our staff are working incredibly hard to provide care and treatment to patients as quickly as possible, particularly those with life-threatening conditions.

“We are sorry to patients who have experienced prolonged waits and would encourage anyone with concerns to contact us directly so that these can be discussed and addressed appropriately.

“Whilst our services remain extremely busy, we’d continue to ask members of the public to choose the right care for their needs, attending A&E when they require urgent or emergency care, and to access NHS 111 online, their local pharmacy, or GP if they require treatment that is not urgent or life threatening.”

Previous : Restaurant owner given ‘insane’ fine for putting up poster asking for new staff
Next : Restaurateur Salt Bae wants to be next social media star to make boxing debut