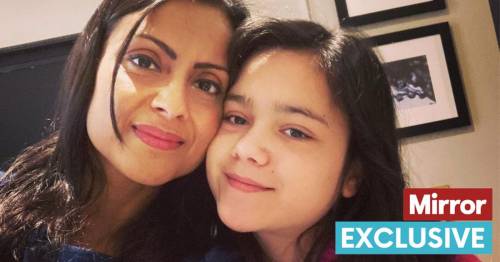 A doctor whose 11-year-old daughter has long Covid says she has spent £6,000 on treatment in Germany because there is no help available in the UK.

Dr Kane, 44, said: “Like most kids, she had quite a mild initial illness. She then never really recovered.

“She had severe fatigue, a sore throat, aches and pains in her legs… she was unable to function. She’d recover, then it would happen again.”

Dr Kane battled for six months to get her daughter treatment on the NHS, but none was available.

Dr Binita rushed her daughter to hospital with abdominal pain
(

She said: “She had the whole barrage of tests done, but they all came back normal. Then she was sent to a clinic that just offers fatigue management. It’s important to know how to manage fatigue, but it’s not going to improve her symptoms by itself.”

Jasmin’s father Mark gave up his business to care full-time for her and sister Maya, nine.

And in February, Dr Kane took Jasmin to Germany to get treatment not yet available in the UK.

After three visits, Dr Kane says Jasmin is “50%” of her old self.

Medics advised Jasmin to go to a fatigue clinic
(

She said: “In the UK, I got all the help available. Everyone was helpful, but there were no answers.

“There are some horrendously sick children in the UK, some completely debilitated and bedbound.”

Of Jasmin’s German treatment, she said: “It’s not medication used often in children. I’m not saying what it is as I don’t want people copycat prescribing – it’s not without risks.

“But within two weeks it started to significantly improve her symptoms.”

Jasmin is now using a medicine not often given to children
(

Dr Kane said the UK is two years away from offering children the drug.

Sammie Mcfarland, CEO of Long Covid Kids, said that among the group’s 10,000 families, hardly any children were recovering and accused the Government of viewing children “as an afterthought”.

The Department of Health said the NHS has 90 specialist sites dealing with long Covid, including 14 paediatric hubs.

It said: “The UK is leading the way on research, treatment, care and guidance, including for children.”

Previous : Carlos Alcaraz makes history after sealing sensational victory over Novak Djokovic
Next : William and Kate want to be known by first names NOT titles in huge shake-up