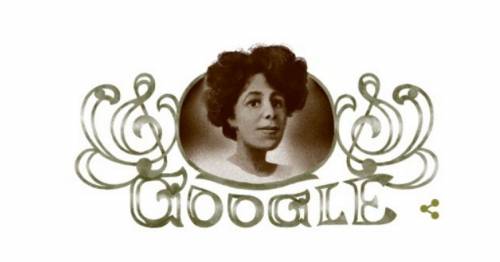 The everyday Brit logging on to Google today will notice a new Google Doodle, with the tech giant showing Amanda Aldridge.

The pioneer musician is the face of Google today and follows in the footsteps of a long list of impressive people to have been honoured this way.

The honour of having someone presented as a Google Doodle is an esteemed one, thanks to the names from over the years including Alan Turing, Rosa Parks, Stephen Hawking and Jane Austen.

It can also be used to signify important events and in Google's home of the US at the moment, there is a tribute to Father's Day.

You can even get in contact with Google to submit ideas for their next doodle by emailing proposals@google.com.

So who was Amanda Aldridge?

Who is the Google Doodle today?

Today's Google Doodle shows off the life, career and work of Amanda Aldridge

The Google Doodle today is Amanda Aldridge, a Black British musician who wrote dozens of pieces of music, was an accomplished opera singer and helped to teach the next generation of musicians.

The day of June 17 was not a random choice for having Amanda as the face of the company's site, but was actually chosen in honour of a a piano recital she gave on this day in 1911.

Her Doodle today joins some famous and esteemed events and names used by Google in the past, including Iceland's national day, the Korean poet Jeong Ji-yong’s 117th birthday and in 2015 the anniversary of France delivering the world-renowned and beloved Statue of Liberty to France.

Who was Amanda Aldridge?

Amanda Aldridge was a celebrated British composer, teacher and opera singer who became particularly famous for her work on 'parlour dances'.

She was born in March 1866 in London and soon turned her hand to singing at London’s Royal Conservatory of Music, before this passion was cut short by damaged vocal cords thanks to a bout of laryngitis.

The daughter of a Black American Shakespearean actor Ira Aldridge and Swedish opera singer, Amanda developed into a composer and was well-known for her parlour dances.

Parlour music was performed in the living rooms of generally middle-class people who could afford to stand around singing.

Amanda brought Africa-American poetic influences to her work, along with similarly inspired music in what was a "fusion of musical styles".

Previous : Mike Tindall once drunkenly punched stunned Prince Harry in bizarre prank
Next : Gran told she’d won £3.5m house in £10 raffle thought it was a hoax and went to pub