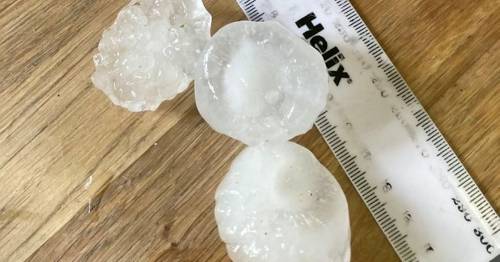 Hailstones the "size of golf balls" smashed car windows and caused flash floods after parts of the UK were hit by freak weather as Britain's barmy heatwave continued.

Large parts of Essex were hit by thunderstorms with the "golf ball-sized" hail and flash flooding and rapid gusts of wind pelting gardens and homes.

A village graveyard was among the areas to be deluged after thunderstorms and torrential rain struck Cambridgeshire.

Photos from residents in Linton, South Cambridgeshire showed roads submerged in floodwater and graves at the Parish Church of St Mary the Virgin under a layer of water.

Residents living in Kibworth Beauchamp, Leicestershire, were also left counting the cost after a storm caused thousands of pounds worth of damage on Tuesday evening.

Care homes and sheltered housing were also evacuated when hail smashed glass and corridors were flooded as a months' worth of rain fell in just 30 minutes. 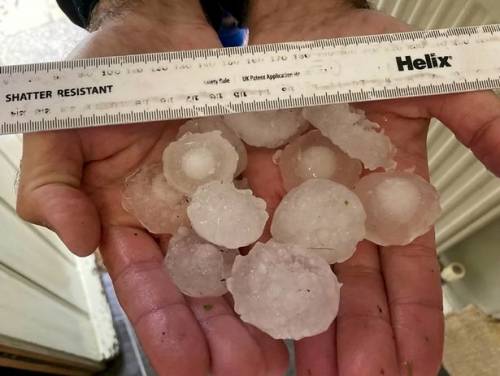 The hailstones came as the UK is in the grip of a heatwave
(Image: Katie Jaffar / SWNS)

IT manager Kevin, of Kibworth Beauchamp, said: "It was about 6pm when the heavens just opened.

"The hails stones were huge, I've never seen anything like it. The only thing I can compare it to was monsoon season when I went to Thailand.

"The hail was that severe it smashed the back windscreen of my car, I know other people in the village who had their car windows smashed too.

"But we got off lightly because some houses flooded and the local primary school roof collapsed.

"It all happened so quickly, it only lasted about 45 minutes but the damage was far-reaching. It was crazy really.

"The damage must be running into the hundreds if not thousands of pounds. But just a few hundred metres down the road it stayed gloriously sunny. 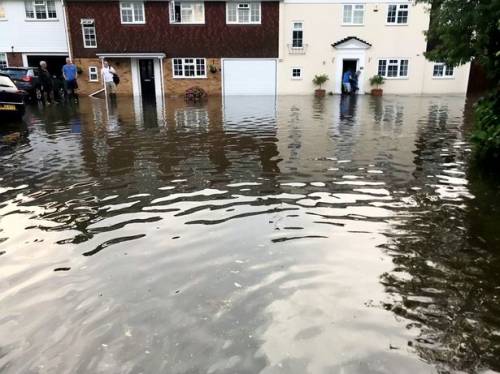 There was flooding in Kibworth village
(Image: Kevin Messenger / SWNS)

"You don't expect it in this country but after the heat we have been having, the storms are bound to come.

"It was a surreal experience. One minute you are basking in the glorious sunshine, and then all of a sudden the noise started echoing around the house. 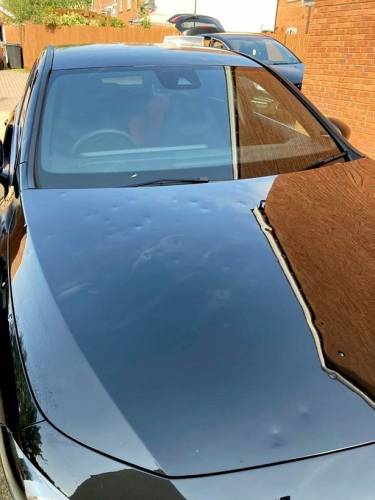 "I was gutted about the car but I do feel fortunate and a bit grateful definitely as there have been worse-impacted people than me."

Mum-of-two Katie Jaffar, 46, said both of their family cars were a "total write-off" following the torrential downpour.

She said: "One minute the kids were playing with their friends in the paddling pool and it was gloriously hot.

"The next minute huge dollops of rain started falling and then it turned into hail – huge lumps of it thundering down.

"It was so fast, it was pretty terrifying. It sounded like gun shots.

"We went from sunshine to having a stream running outside our front door in around 15 minutes. 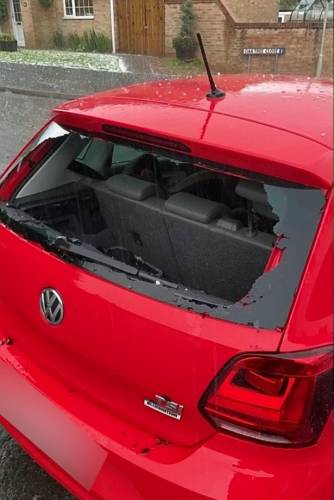 One car had the back window damaged by the hail
(Image: Kevin Messenger / SWNS)

"That was the most frightening thing, how quickly it all happened.

"Our new Porsche has huge dents all over it, my husband is gutted as we only recently got it and it's his pride and joy."

She said the force of the hail also smashed through a large skylight at her mother's home nearby and water flooded the corridor.

"Our neighbours' cellars are flooded and there was water up to the front door. It was just so scary how quickly it happened and the damage it caused."

Mum-of-one Emily Bevan, 29, added: "It was like something from a disaster movie, it was apocalyptic. I have never seen weather like this in Britain. 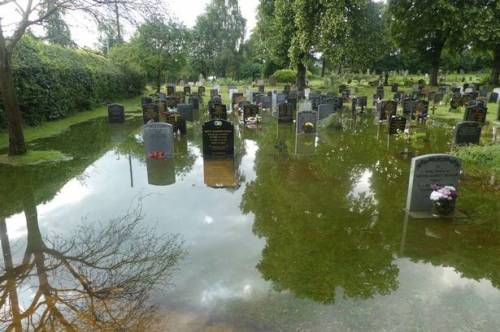 The graveyard in Cambridge was submerged in water
(Image: CambridgeLive/ WS)

"The noise of it was just deafening as well. It was bonkers."

"Everyone pulled up on grass verges and pavements trying to hide under trees or bridges.

Leicestershire Police said it closed the A6 Harborough Road, at Kibworth, in both directions due to flooding.

Previous : Girl, 11, suffers head injury after being run over outside school at end of term
Next : Some Hong Kong banks decline mortgages for Evergrande’s off-plan projects