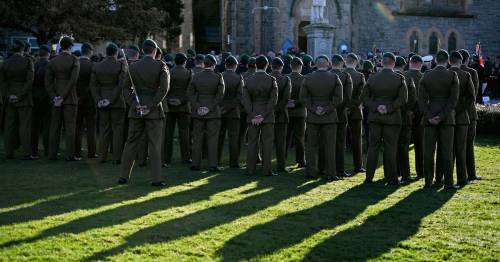 Veterans are calling for change of their benefits systems after the government ignored MPs' calls for a full inquiry.

The system is meant to aid veterans, but many say it pushes them towards poverty, even worse health and sadly even suicide.

Ex-forces members are eligible for benefits for being physically or mentally harmed in service.

Those claiming for incidents before April 6 2005 can apply for war pension payments. After that point they must go to the Armed Forces Compensation Scheme (AFCS).

Both are run by Veterans UK, part of the Ministry of Defence.

Last month MPs won a debate calling for an inquiry into the AFCS and war pension systems.

The debate was brought by SNP MP Owen Thompson, whose veteran constituent Garry McDermott has been struggling to get the correct level of war pension for 10 years.

Thompson said the current system is a "national scandal that should have us all hanging our heads in shame".

But yesterday defence minister Leo Doherty said there would be no review.

In a written answer to Owen Thompson, Doherty said: "There are no plans for an inquiry into the process for war pensions or AFCS payments.

"Where issues are identified, the Ministry of Defence is committed to addressing these and remedial action is taken swiftly to ensure the process remains as efficient, transparent and emphatic as possible."

Many veterans trying to access these payments say they face long waits to have their claim heard only to be turned down or not given enough money.

They then have to undergo lengthy and difficult struggles to appeal their case at a tribunal, which often fails.

Now veterans say they feel let down by the government decision and have launched a petition trying to get a full inquiry.

The petition says: "The ongoing malpractice and mistreatment of the military community is a well-documented fact. Veterans have stated that they have considered self harm, and in some cases, suicide because of the lack of action and empathy by these agencies.

"The system requires a complete overhaul from the top down. It needs to be fair, open and transparent at every juncture."

The petition can be signed here .

McDermott, 47, a veteran of the Royal Scots, said: "I'm absolutely raging. The whole thing's a mess. I feel like I've been kicked in the teeth."

He said: "I am gobsmacked. They have fundamentally failed to grasp what people are going through, and the department is marking its own homework.

"There are also a lot of people out there who think if they complain, or make a fuss, that they will get blackballed by Veterans UK."

John Topping was until recently a member of the Veterans' Advisory and Pensions Committee, a government-appointed but independent body to help veterans leaving the forces.

Topping said: "We need a high-profile Rottweiler type of person to take this forward and support us. This needs an inquiry."

Previous : New Russian Navy ship ‘limping back to port on fire after Ukraine strike’ – World News
Next : ‘I saved £30,000 for my first home but still couldn’t get on the property ladder’