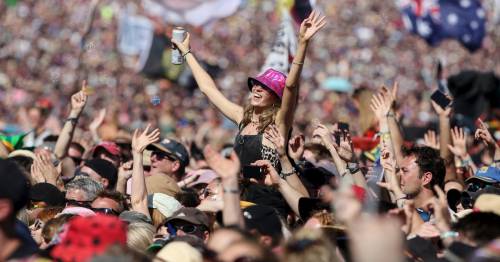 Music revellers attending the Glastonbury Festival are set for highs of 25C as forecasters predict warm weather for the five-day event.

The renowned music festival, which starts on Wednesday after being cancelled for the last two years due to the pandemic, will see temperatures peak on Thursday according to the Met Office.

Sunday will bring cooler weather of 16C and conditions are likely to be unsettled, with a chance of rain on Friday, Saturday and Sunday.

This year's festival, which will be headlined by Billie Eilish on the main Pyramid Stage on Friday night, during which music lovers will see a spell of persistent rain that evening.

While rain is also a possibility on Saturday, a blustery breeze will make it feel much cooler by the end of the weekend.

Most Glastonbury festivals have seen a mixture of sunshine and showers, archive figures show.

Sunday is set to bring cooler weather for festival goers
(

There have been only nine completely rain-free festivals since the event was first held in 1970.

The 2007 festival holds the record for the single wettest day, when 60.1mm of rain fell at the nearby weather station at Rodney Stoke.

The lowest minimum temperature has been a chilly 4.2C, recorded at Yeovilton weather station in 1987.

In contrast, the highest maximum temperature was recorded five years ago in 2017, when the Rodney Stoke weather station reached 31.2C.

Most Glastonbury festivals have seen a mixture of sunshine and showers
(

The strongest gusts of wind were recorded in 1985 and 1987, when 41mph was reached at Yeovilton.

Even if there is little rain during the festival itself, heavy downpours in the days beforehand can turn the site into a mud-bath.

This is what happened in 1997 and 2016, leading to wretched conditions for most people – although some refused to let it spoil their enjoyment and chose instead to have a glorious wallow in dirt.

With little rain forecast ahead of this year's festival, a mud-bath on a similar scale looks unlikely.

But showers over the weekend might leave the 200,000 festival-goers feeling rather damp.

Below is the Met Office forecast for the five-day weekend festival.

Wednesday is set to be another dry day with plenty of lengthy sunny spells. Temperatures will continue to rise. Maximum temperature 25 °C.

Remaining dry with plenty of warm sunshine on Thursday, and turning warmer once again.

A generally unsettled start to the period as a band of potentially heavy rain continues to move east across the UK on Saturday.

This is followed by sunny spells and showers, some heavy and possibly thundery.

Sunday is expected to be mostly dry and bright at first but with showers once again developing through the morning, some of which could be heavy, and possibly thundery.

The unsettled pattern is expected to continue to dominate into the start of next week.

Previous : Dead couple may have lay in house for a YEAR as neighbours thought they’d moved – World News
Next : Prince George’s sweet charity gesture after concern for endangered animals in Africa