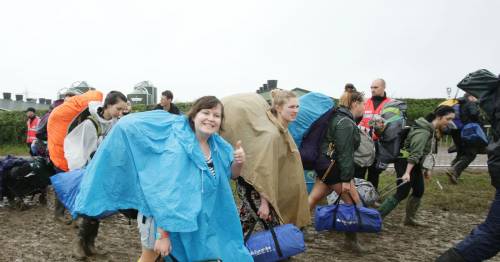 Glastonbury's weather forecast for the five-day event is in and it looks set to be a mixed bag with rain trying to ruin fun at the weekend.

The huge globally-famous event – which has been cancelled for the past two years due to the coronavirus pandemic – kicks off on Wednesday.

The sun is due to shine on the Somerset-based festival with highs of around 24C-25C for the first few days.

But by Friday the temperature drops and the showers begin for the rest of the weekend.

The Met Office forecast for Wednesday to Friday reads: "Remaining dry with plenty of warm sunshine on Wednesday and Thursday, and turning warmer.

People watching the Pyramid Stage at the Glastonbury Festival in 2015
(

Saturdays high will be 17C, with light showers changing to cloudy in the afternoon, dropping again on Sunday to 16C, with rain hitting again in the late morning.

Festivalgoers arrive for the Glastonbury in 2016
(

Around 200,000 people will descend on Worthy Farm in Somerset which will see its delayed 50th anniversary celebration, which has been hosted by Michael Eavis since 1970.

This year’s Glastonbury Festival will be headlined by Billie Eilish on the main Pyramid Stage on Friday night.

Paul McCartney, who has just turned 80, will perform on Saturday night.

While Kendrick Lamar headlines on Sunday.

Big name acts who will perform on the other stages include Foals, Pet Shop Boys and Megan Thee Stallion.

Previous : Woman ‘has heart attack’ after rushing for new gate amid horrific delays at airport
Next : Archie Battersbee’s family given go-ahead to take case to the Court of Appeal