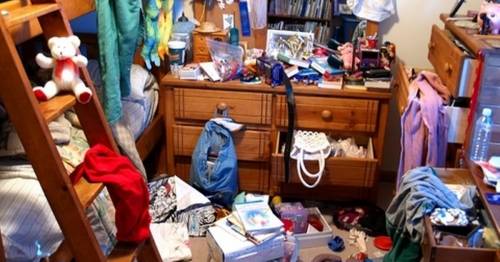 Girl, 8, crowned UK’s messiest child of 2021 as you can’t see any carpet in her room

A young girl has been crowned the UK's messiest child of 2021 – and in picture evidence you can't see any carpet in her room.

Eight-year-old Emily from Glasgow has been named the messiest child in the UK after a nationwide competition was launched by Happy Beds.

They offered a prize worth £400 to any parent who could prove that their child had the least tidy room, and Emily's dad Steve jumped at the chance to win.

After reviewing the evidence, experts at Happy Beds agreed that Emily had beaten over 100 other entries and was indeed the messiest child of 2021.

Emily was crowned the messiest child of 2021
(

What do you think about Emily's tidying skills? Let us know in the comments…

Steve said: "My daughter Emily, unfortunately, treats her room like more of a changing room and spends almost all her time in the family room instead – aren’t we lucky!

"Anytime tidying is enforced it takes no more than a week to revert back to looking like a bomb zone. I’m hoping a new bed inspires positive change and behaviour!"

Parents from across the UK entered the competition, sharing shocking pictures of their children’s messy bedrooms – with many showing toys and beds in total disarray.

Meanwhile, a man was left in stitches after asking his flatmate to pick him up a Peperami from the shop – but he received pepperoni slices instead.

Taking to Reddit, the man said he'd asked for a 'five pack of Peperami Hot' from Asda, and his housemate was obviously a little unclear about what that was.

The housemate came back with five packs of Asda Pepperoni slices, and it's easy to see how he get the two confused.

Do you have a story to share? We'd love to hear all about it. Get in touch via yourmirror@mirror.o.uk