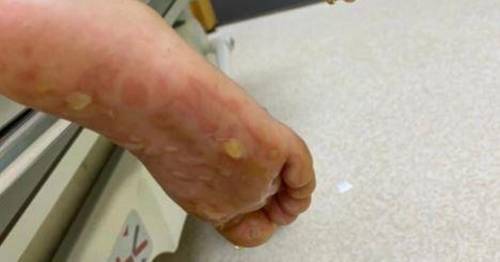 Girl, 2, screams in agony after standing on boiling sand where BBQ was chucked

A two-year-old girl was left screaming in agony after stepping on the searing hot coals of a BBQ that had been left on a beach.

Jo Paic, 43, of Thorpe Bay, Essex, described how her little niece Sadie needed treatment for badly-burnt and blistered feet after the incident.

The family is now calling for better rules about beach BBQs and have urged holidaymakers to water and sand-over the areas around barbecues.

Recalling the horror incident, Jo said "This weekend, like most sunny weekends, we went down to our beach hut to chill and hang out.

"Our niece, was hanging around with us as I'd promised her our pink bucket and spade that we keep just for her and her older cousin. 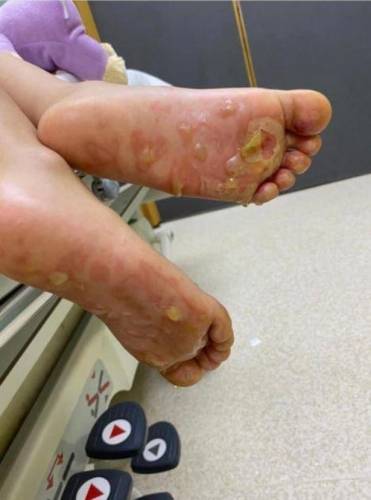 The child was left with blistered feet

"She had taken her little rubber shoes off as the stones kept getting caught in them and she didn't like it.

"The next thing we heard was her crying – she was barely two metres in front of us.

"She then started screaming. A scream that you know a kid makes when something bad has happened.

"I started dousing her feet in cold water as we suddenly realised that she'd stood on the exact spot where the neighbour's tin barbecue had been."

Jo said that rushing her home, the family put her feet in a bath of cold water before ringing 999.

Still in agony, Sadie was taken to Southend hospital A&E and was transferred to the specialist burns unit at Broomfield Hospital.

She added: "I'm not looking to attribute blame, it could have been any of us. But if you take a portable barbecue down to the beach please make sure that when you've finished you douse it underneath as well as on top of it. 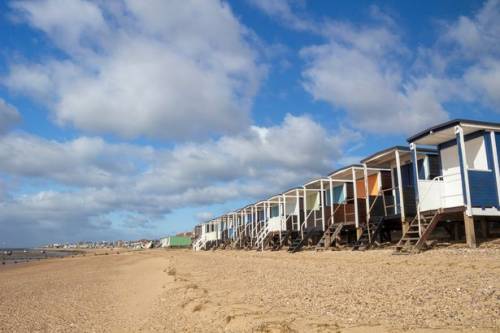 "You never know who is going to sit down or stand in that spot when you've left."

Martin Terry, councillor for public protection, said "This incident is truly horrifying, and I hope the young girl makes a swift recovery.

"This was completely avoidable, but unfortunately this brave young girl has suffered due to inconsiderate disposal of a barbecue on the beach.

"I know the people responsible would in no way have looked to cause harm to anyone, but this unfortunately serves a stark reminder that we all need to take the appropriate precautions when disposing of barbecues in public areas.

"While there are no bylaws in place for us to enforce not having barbecues on beaches, we have used signage and public engagement to try and manage the issue as best we can, including moving people away from large crowds and busy areas for example, and encouraging responsible disposal, including cooling down the sand the barbecues sit on with water.

"Whilst the responses to the recent barbecue consultation are collated and considered and any potential actions are taken forward, I would urge everybody to please think about this incident and act responsibly and think of others if having barbecues in public areas."

Seafront trader Paul Thompson, owner of Pebbles One in Marine Parade, said: "The fumes are poisonous and because of the breeze it just gets blown across the beach.

"We've had it on our terrace with people getting smoked out.

"The fumes fill up our building too and for the businesses on the other side of the road it sets their smoke alarms off."

Previous : Top racing tips and Nap from Newsboy for Thursday cards including Sandown and Newbury
Next : Tokyo Olympics 2020 explained in numbers – everything you need to know