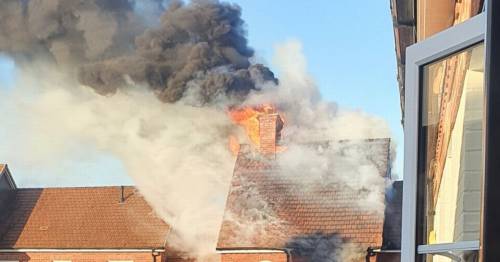 A 14-year-old girl has been hospitalised after a fire tore through a house in Dorset.

Firefighters raced to the scene on Ryan Way, Wimbourne, shortly before 8.30am on Monday following reports of flames coming from one of the upstairs windows.

Three engines were needed to stop the blaze as neighbours looked on in horror.

The teenage girl is understood to have been in the property alone as her mum took her little brother to school when the fire broke out.

She told crews at the scene she had been downstairs, but went to look at what was happening when the fire alarm went off.

Station commander Julian Lockwood told the Bournemouth Echo: “The 14-year-old was downstairs in the kitchen the smoke alarm had gone off, which is brilliant, her mum had left to drive her brother to school.

"She phoned her mum and her mum said ‘just get out the property.’

"She did actually just go quickly upstairs, have a look, saw the fire and smoke and she breathed in a bit of smoke and then she got herself out."

He added that the family pets have also needed some treatment at the scene, with two kittens being given oxygen following the fire.

"There was a cat and two kittens, I think the cat made its way out but firefighters found two kittens downstairs so we actually have a pet therapy kit, they got a bit of oxygen therapy, but they’re fine and they’re now with the neighbours," he said.

It is not yet clear what caused the blaze.

A spokesperson for Dorset and Wiltshire Fire Service said: "Firefighters from Wimborne, Poole (x3 engines) Redhill Park and Ferndown as well as the Aerial Ladder Platform (ALP) from Westbourne were called to Ryan Way, Wimborne at 8.28am this morning.

Fire fighters were called shortly before 8.30am

"They were called to reports of flames issuing from the first floor window of a semi detached property.

"The fire is now under control and crews are using the ALP to assess the roof space for any fire spread.

"Firefighters have used six sets of breathing apparatus and three hose reels and three main lines to extinguish the fire."

They added: "A fire investigation will begin as soon as it is safe to do so."

Previous : Meghan and Harry ‘sneaked onto’ commercial flight home to LA after private jet criticism
Next : New homes will be forced to include electric car charge points from next year