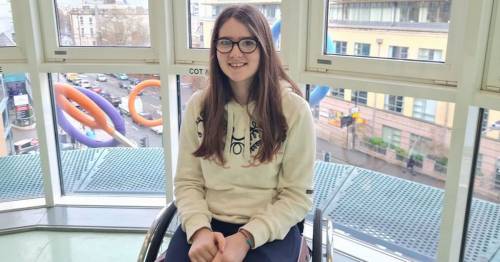 A 13-year-old girl who felt pins and needles while lying in bed has been left paralysed after suffering a "freak accident".

Nancy Jubb felt a "burning sensation" in her legs as she lay in bed, which doctors found was caused by a loss of blood supply to vital nerves that has left her lower body paralysed.

Medics found the teen had suffered an unexplained spinal stroke after at first thinking she was suffering from inflammation of the spinal cord.

They are still unable to explain what caused the mystery spinal stroke.

Nancy, from Bath, was admitted to hospital on February 20 and has spent most of her time there since – only coming back home for a few days at a time.

Nancy was a keen netball player
(

Her mum, Katherine Jubb, told SomersetLive that Nancy's paralysis was a "massive shock".

She said: "It came completely out of the blue. If there had been a specific event that led to Nancy losing feeling in her legs, I think it would have been easier to comprehend.

"She was lying down in bed and she got pins and needles in her legs, then a burning sensation. There wasn't a lot of pain and at the time we thought it was just a trapped nerve but it slowly got worse over about six hours and she was told not to move.

"The doctors still don't know why it happened. They think it was a freak accident or that it might have been lots of small movements over a period of time that cut off the blood supply, but once those nerves die they don't grow back.

"This means that she is paralysed from the waist down and she is very unlikely to ever regain feeling. I have found it hard to stop crying but Nancy is so strong and still smiling despite being on a lot of medication that makes it hard to sleep."

Before her stroke, Nancy was a keen sportswoman who played for her local netball and cricket teams. She was also a junior coach at Baskerville Gymnastics and swam for the Bath Dolphins.

She wants to get back into sport, although this will take time, and has mentioned swimming and wheelchair basketball as possible options. Mrs Jubb praised Tash, who coaches the Bath Cougars netball team, for all her support over the last few months.

The mum-of-two said: "Tash has just been amazing. She has wrapped Nancy up in care and warmth. The folk at Baskerville Gym have also been so lovely and caring this whole time, and the Bath netball team met her on Friday with a signed ball and a hoody."

Tash has now launched a crowdfunding campaign online to help pay for the unexpected costs of Nancy's condition. These include adapting her home to have a downstairs loo, shower, and bedroom.

Mrs Jubb explained: "At the moment, she has a hospital bed in the living room which she can come home to at weekends but not having a shower downstairs has been really difficult. Her hospital wheelchair is also really big and clunky, and we will have to change our car because it doesn't fit in the boot.

"Going forward, Nancy would like to get an off-road wheelchair so she has more flexibility around where she can go. However, everything is so expensive and we want to save some money for things she will need in the future."

You can find the JustGiving page for Nancy's rehabilitation here.