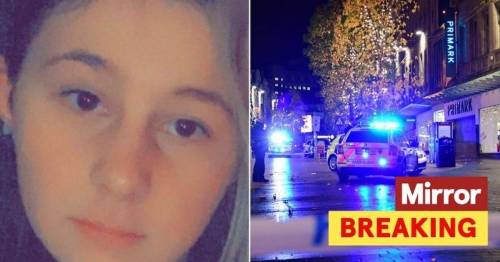 Girl, 12, stabbed to death in ‘row with boys’ – as 4 teenagers arrested for ‘murder’

A schoolgirl who collapsed after an alleged city centre stabbing has died – as four teenagers are arrested on suspicion of her murder.

Police were called at around 8:39pm and the victim, who had been with friends, was rushed to hospital – but sadly died.

A member of the public had tried to give first aid at the scene.

Four males – one aged 13, two aged 14 years and one aged 15 years, all from Toxteth – have been arrested on suspicion of murder.

Ava's cause of death is yet to be determined, Merseyside Police said.

But the force previously said it had been called to reports of a stabbing.

Assistant chief constable Jon Roy said: "Our thoughts and condolences go out to Ava’s family, who are being supported by specialist Family Liaison officers.

Do you know what happened? Email webnews@mirror.co.uk.


"Their world has been torn apart and no parent should ever have to face that knock on the door from police officers to say that their child has died.

"We believe that Ava and her friends had been involved in a verbal argument which culminated in Ava being assaulted causing catastrophic injuries.

"And we understand that the offenders were then seen to run up School Lane across Hanover Street and on to Fleet Street.

"Liverpool City Centre was very busy at the time of the incident as the lights on the Christmas tree on Church Street had been officially switched on a short while earlier and we would appeal to anyone who was on Church Street who saw the incident, or may even have captured it on their mobile phone, to come forward.

"Anyone who witnessed the incident, or may even have filmed the inciden, or who has information which could help us with our inquiries, is asked to DM @MerPolCC, message ‘Merseyside Police Contact Centre on Facebook’ or @CrimestoppersUK on 0800 555 111 with reference 0899 of 25 November.

"There will be additional officers in the city over the coming days and in the run up to Christmas who will be providing visible reassurance to those who live, work and visit the city.

The scene will remain in place on Friday, police said
(

"Ava’s death should be a reminder to us all about the part that we each have to play in eliminating violence against women and girls.

"Ava died on White Ribbon Day which is a global campaign to end violence against women, and yesterday partners from around the city joined together to mark the day, which is also the start of 16 days of activity designed to raise awareness of VAWG and show how we are working together to make sure that VAWG is something that should not be tolerated in any society."

"We will endeavour to release the scene as soon as is practically possible, but we would ask members of the public for their understanding and patience whilst our investigations are being carried out so that we can bring justice for Ava and her family."