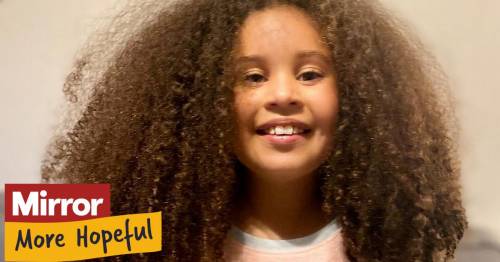 Girl, 11, who has waited half her life to donate her hair to charity finally can

For many years, people have been chopping off their long locks and sporting shorter 'dos in order to donate their excess hair to the Little Princess Trust, which provides real hair wigs to children who have lost their own through cancer treatment or other reasons.

But when Poppy Lee-Burrowes decided she wanted to cut her hair for the cause when she was just five years old, she was told she wasn't able to – as the charity couldn't make wigs from afro hair.

The determined youngster didn't give up though and kept growing her hair out for six more years just in case the policy changed – and in April 2021, it did.

Poppy, now 11, still plans to donate her hair to the Little Princess Trust and will be chopping off about eight inches on January 29.

Despite knowing she will miss her "big hair, don't care" look, she knows that "other people will be able to love my hair too".

The school student from Rhondda Cynon Taf, Wales, said: "I want to do it because of the people that won't have hair. I want to be generous and help."

Poppy also has a fundraising page that was set up to raise money for the wig-making charity, and the page states the "big cut" will be a "big deal" to her.

She added: "It's taken me since I was about five, I have only ever had small trims in my life, never a big cut, so this is a big deal to me.

And Poppy's mum Jessica explained her daughter first wanted to cut her hair six years ago after hearing about her friends who had done the same.

She told the BBC: "It was last year a friend sent me an article to say they were now able to accept afro hair.

"We showed it to Poppy and she was ecstatic, over the moon. She was more than happy to have it cut and share her hair.

Jessica was initially "disappointed" to learn the Little Princess Trust couldn't accept afro hair but said she understood "because of the extensive work they put into making these wigs and how important they are".

It can take 30 to 60 hours to make a hand-tied individual wig, according to Little Princess Trust's chief executive Phil Brace.

Previously, the trust offered afro-style wigs using straight hair which was later curled into the requested style as it was unable to find a wig manufacturer able to use hair donations from black and mixed-race people in wigs.

Afro hair can easily break in the wig-making process, but after teaming up with London company Raoul to develop a wefting method, the Little Princess Trust is now able to accept donations of afro hair.

Poppy's other mum, Beki, said: "I think it's really important that they're now accepting afro hair because obviously to help all children and I think it will help children to keep their identity as well.

"I think that's really important and it's a really big step."

For more information on Poppy's haircut, and to donate to the cause, visit Poppy's Afro Chop page on Just Giving.

Previous : Catching a cold could help you beat Covid – but jabs are best protection, study shows
Next : Coldest air of the season hits Northeast, with wind chill well below zero