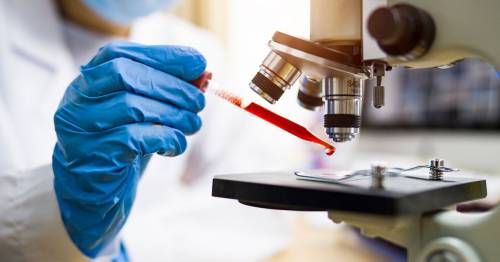 Scientists have discovered a gene that more than doubles the risk of becoming severely ill with Covid.

Researchers from Poland's Medical University of Bialystok found the gene is the fourth most important factor determining how severe their case of Covid is.

Around 14% of the Polish population were found to have the gene, compared to 8-9% in Europe as a whole.

The finding could help doctors identify those who are most at risk from the disease and prioritise their jabs.

It's hoped that the new study will help vaccine uptake in the country as hesitancy to get jabbed continues to fuel covid deaths in central and eastern Europe.

Latest figures show 56.2% of the Polish population are fully vaccinated, compared with 71.1 per cent in the UK, reports the MailOnline.

It comes as union chiefs fear tens of thousands of NHS staff will quit rather than be forced to have mandatory Covid jabs.

But from April frontline NHS staff in England will be moved to other roles if they are not jabbed.

The TUC fears the rule will spark a mass exodus of staff from a service which already has 93,000 vacancies

Frances O’Grady, the TUC’s general secretary, said: “We are in the middle of an NHS staffing crisis, born not only from Covid absences but also long-term problems that need long-term solutions. Now is not the right time to introduce more bureaucracy.”

Calling for a delay to the jab plan, she added: “The Government’s own impact assessment of its policy concluded that as many as 73,000 staff may leave rather than get jabbed.

“Women, people from ethnic minorities and younger workers are among those most likely to quit.”

Previous : ‘The Queen realised the reputation of royals has to come before her son’s interests’ – Voice of the Mirror
Next : Virgin Media to raise prices by £56 for millions of customers – see how it affects you