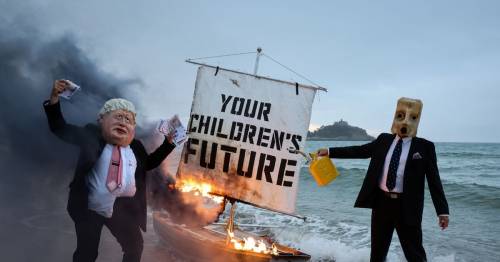 Protesters aiming to disrupt the G7 summit are heading to Cornwall as world leaders prepare for their first meeting since the pandemic started.

A giant US air force C-17 Globemaster plane carrying Joe Biden ’s Marine One helicopter was seen touching down at RNAS Culdrose in Helston before the Carbis Bay talks.

More than 6,500 police will tackle protests and security, with hundreds staying on 663ft cruise ship Silja Europa, docked in Falmouth.

Demonstrators plan to make their voices heard at official protest points in Falmouth and Truro.

“No major economy has implemented policies consistent with limiting global heating to 1.5C. We need to see ambition including an end to financing for fossil fuel.” 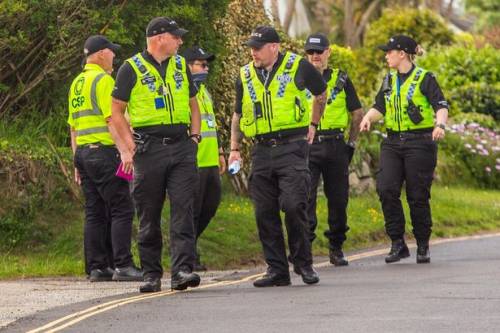 Police and security teams keep a heavy presence in Carbis Bay, Cornwall, ahead of the G7 summit.
(Image: SWNS)

Ocean Rebellion, which describes itself as “the sea-faring sister of Extinction Rebellion”, set a boat alight at St Michael’s Mount on Saturday as part of a “theatrical action” aimed at PM Boris Johnson.

He is hosting leaders including the US President, France’s Emmanuel Macron and Germany’s Angela Merkel this week.

Mr Biden said he would use the meeting to “affirm the special relationship” between the US and Britain.

No10 did not deny claims the PM thinks the phrase “special relationship” is “needy and weak”.

His spokesman said: “That in no way detracts from the importance with which we regard our relationship with the US, our closest ally.”

On the protests, he said: “While we support people’s right to protest within the law, this is an important meeting that will focus on a number of the public’s priorities.”