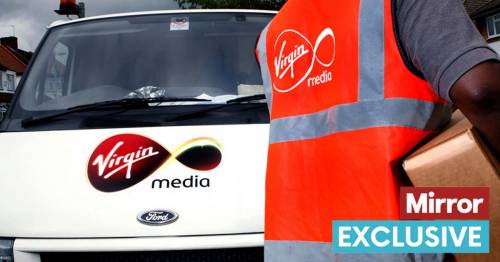 Millions of Virgin Media customers face a £25 “doorbell tax” if they fail to answer when an engineer turns up for a home visit.

The fine is added to the normal monthly broadband charge – which went up in March.

Customers are furious, given that Virgin recorded revenue of £2.5billion and the chief executive of its parent company is paid £50m a year.

The penalties are imposed when assistance has been requested but the engineer gets no response at the door.

Customers are warned by text message: “A £25 charge will be added to your next bill if you miss this visit.”

Emma Robinson, 42, is among customers outraged at receiving the warning. Emma, from Caterham, Surrey, said: “I have two young children and it’s not unusual for me to fail to hear the doorbell ring if I am upstairs giving my baby a bath.

“Now Virgin want to fine me for not answering my door when they rarely pick up the phone themselves and offer some of the worst customer service on the market. Unbelievable.”

Under current rules, internet providers are obliged to pay customers £25 for each appointment the company fails to fulfil, or for appointments it cancels with less than 24 hours’ notice. But angry Ted Johnson from Southport, Merseyside, said: ”I’ve had three missed appointments and not received compensation.”

As well as the huge salary, boss Mike Fries has 120 hours a year personal use of the company’s jet.

Virgin, which has 3.2 million UK users, was criticised by the regulator Ofcom last year for poor service. It found customers waited an average of seven minutes and 40 seconds to speak to call-centre staff – the worst in the industry.

Martyn James, of complaints handling group, resolver.co.uk, said: “Anyone who has spent ages trying to get an appointment for a fault – or has waited at home till the evening with no knock on the door – will be outraged that a missed appointment could result in a charge.

“The broadband industry has a pretty terrible reputation for missed appointments, service and sorting complaints.

“Until the sector has its house in order, it shouldn’t be charging extra for anything – including missed appointments and exit fees.”

Restaurants, hairdressers and dentists are among others to bring in fees for missed appointments. Virgin did not respond to requests for comment.

Previous : ‘Menopause was the path to my inner peace as it helped me focus more on myself’ – Saira Khan
Next : Covid and Brexit behind surge in fake ecstasy pills made from psychosis-inducing drug