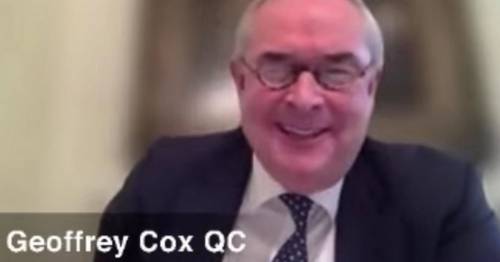 Geoffrey Cox has been blasted for “taking the mick” out of voters after returning to his second job while the Commons is sitting.

The MP was slapped down by Downing Street when it emerged he took part in a tax haven’s corruption inquiry on 11 days when Parliament was in session.

No10 said it would back a change in the rules so MPs would have to keep their second jobs “within reasonable limits”.

Yet today, Sir Geoffrey was seen again in a day 55 virtual hearing of the British Virgin Islands Commission of Inquiry, where he is acting for the tax haven’s government.

The inquiry is probing claims of “corruption, abuse of position and serious impropriety” in the sun-drenched territory in the Caribbean.

Perhaps wisely, Sir Geoffrey – who spent an average of 22 hours a week on his outside work – had blurred his background on the Zoom hearing.

He was previously reported to the Commons standards watchdog for appearing to take part from his Parliamentary office. He denied breaching the MPs’ Code of Conduct.

Deputy Labour leader Angela Rayner said of the former Attorney General: “Geoffrey Cox is taking the mick and the Prime Minister is letting him get away with it.

“This is a test of leadership for Boris Johnson.”

She added: “You can be an MP representing your constituents or you can represent a tax haven against our own government.

“You cannot be both and Boris Johnson needs to decide which Geoffrey Cox will be.”

A poster about Sir Geoffrey Cox MP seen in the window of an empty shop in Brook Street, Tavistock
(

Tallies by the Guardian and the Daily Mail suggest the barrister made between £5.5m and £6m from his private jobs since 2009.

Sir Geoffrey has spent 22 hours a week on private work in the last year, but only spoken in the Commons once in that time.

He later declared a further £54,404 and 49 pence of outside earnings in the month of August, while the Commons was in recess.

Sir Geoffrey’s office issued a defiant statement when the full extent of his second job emerged, saying he “regularly works 70-hour weeks” and constituency work is “given primary importance”.

It boasted he was a “leading barrister” adding: “He was asked to advise the Attorney General and the elected Government of BVI, a British Overseas Territory, in a public inquiry into whether corruption, abuse of office or other serious dishonesty may have taken place in recent years in the Virgin Islands and to carry out a review of its systems of government in preparation for that Inquiry.

“Prior to accepting the role, he sought and obtained the approval of the Office of the Attorney General of England and Wales that there would be no conflict of interest with his former role as Attorney General.

“This is not to “defend” a tax haven or, as has been inaccurately reported, to defend any wrongdoing but to assist the public inquiry in getting to the truth."

Previous : U.S. should not have any illusions about Taiwan, says China
Next : Muslim MPs share horrifying hate they’ve received – but debate plunges into angry row