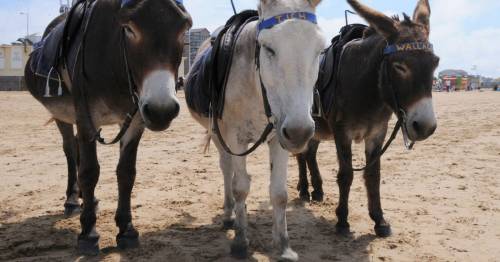 Animal lovers said they were "disgusted" by the sight of donkeys being made to work on a beach while temperatures reached highs of 27C.

Outraged locals from Weston-Super-Mare noticed how the donkeys were being made to work on the sizzling beach as they appeared during a BBC broadcast on public health during this month's unprecedented heatwave.

Colin Bawden was among those who said something "ought to be done" to keep the animals safe from the blistering weather.

Temperatures were expected to hit 27C in Weston on Tuesday and again on Wednesday (June 21) with the Met Office issuing an amber warning for extreme heat bringing a risk to health, BristolLive reports.

Mr Bawden said: "It's disgusting. I show dogs but I wouldn't put them out in this weather, I would keep them in the cool.

"It seems wrong for them (donkeys) to be working on the hottest day when there is a warning in place.

What do you think of this? Let us know in the comments below. 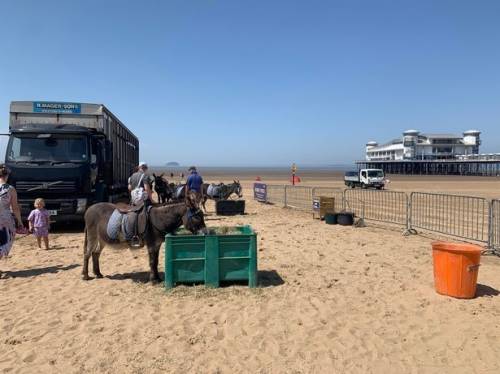 Viewers branded the treatment of the donkeys 'disgusting'
(Image: donkeys on beach)

"Something ought to be done."

The RSPCA has warned that without adjustments to their care, donkeys could be harmed in the heat, but a donkey ride operator on the beach yesterday said the animals were being given shade, cold water and adequate rest.

Jacob Fieldhouse said extra measures are being taken to ensure the welfare of the animals in the heat.

He said: "We have kept the lorry alongside so the donkeys have extra shade, water is topped up regularly so its always cold and food is replenished every time it is needed."

He said the animals are used to the heat and they are they are allowed to rest in the shade if necessary.

"Sometimes if they get too hot and eat too much they can get upset stomachs, so they will try and lie down. If this happens we leave them be," he added.

He said eight donkeys working on Tuesday will not work again on Wednesday. He said the operation had 40 animals and shifts are rotated so the same donkey will not be working consecutive days. 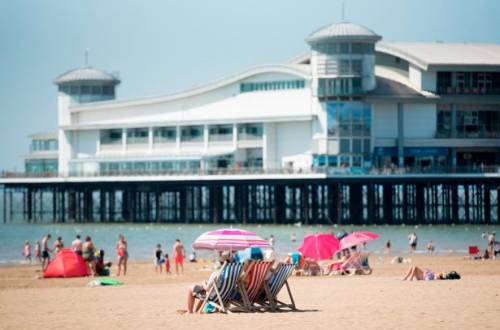 The donkeys appeared during a BBC broadcast from the beach on public health during the heatwave
(Image: Simon Chapman/LNP)

Mr Bawden, who lives in Wiltshire, said "nobody seemed to care" when he raised concerns about the animals, first with police and then the RSPCA.

He later said he received a reply from North Somerset Council's Trading standards department saying it had spoken to operators about welfare measures in place. These included moving lorries during the day to ensure shade, walking them towards a cooling sea breeze and ensuring the donkeys were only doing light work.

You can read the response in full at the end of the article.

Despite this Mr Bawden said he thought it was 'disgusting' the animals were made to work in extreme temperatures.

He said: "I'm not against donkey rides, it's nice to see them on a cooler day, not on the hottest day of the year."

In 2017 a petition calling for the banning of donkey rides in Clevedon attracted 100,000 signatures though some locals mounted a campaign in support of the traditional seaside attraction.

The RSPCA said: “Domesticated donkeys may struggle with extremely hot environments as they are not adapted to the heat and often have thick hairy coats.

“Donkey rides are licensed by local authorities, so members of the public can report any concerns to the council".

"During those conversations, the operators were reminded of their responsibilities as far as animal welfare are concerned: both are licensed under the Animal Welfare (Licensing of Activities Involving Animals) Regulations 2018.

"Based on this Service’s previous dealings with the operators, and mindful of points made during conversations this morning, I would summarise the key points as follows:

Previous : Police hunt drone operators who scared entire seal colony on beach causing stampede
Next : Mum forced to give up baby 66 years ago finds son on other side of world after DNA search – World News