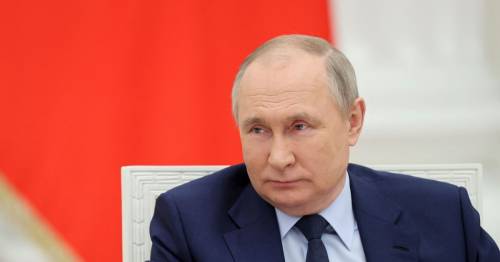 Russian president Vladimir Putin is allegedly purging his own commanders due to their ongoing failures in Ukraine.

A top adviser to Ukrainian president Volodymyr Zelensky has said that Russia ’s top commander General Valery Gerasimov has been suspended and a number of other officers have been sacked.

This comes amid rumours of a purge of Russia’s top brass as the country’s invasion of Ukraine continues well into its third month.

Oleksiy Arestovych, a military intelligence veteran and one of President Zelensky's inner circle, claimed on Wednesday that Gerasimov, the chief of staff of the Russian army, had been suspended.

This came as Putin allegedly was seeking senior commanders to point the finger at over his struggling invasion.

Speaking to dissident Russian lawyer and politician Mark Feygin, on YouTube, Arestovych said Gerasimov had been suspended and that Putin was deciding whether or not to give the 66-year-old general time to right his wrongs.

Arestovych admitted this information was “preliminary” but it comes after reports of Putin’s growing anger at members of the Russian military establishment.

According to information released on a Telegram channel run by the Ukrainian interior ministry, two more commanders have been fired due to failures on the battlefield.

They also claimed the commander of the Black Sea fleet has been sacked and arrested with his vice admiral under investigation.

The Find Your Own Telegram feed ran by Kyiv’s interior ministry said: “After the failure in Ukraine – repressions and purges in the Russian army.

“The Commander of the Black Sea Fleet, Admiral Igor Osipov, was removed from his post and arrested. [There are] Investigative actions in relation to… first deputy commander of the fleet, Vice Admiral Sergei Pinchuk.

Despite its size and resources, Russia’s army has been repeatedly humiliated by Ukraine on the battlefield and suffered severe losses so far in the war.

Early reports suggested Moscow aimed for the invasion to be over in a matter of weeks but now find themselves dug in as fighting reaches its 77th day with no sign of stopping.

Only yesterday, it emerged that Russian troops were decimated whilst trying to cross a river in the Donbas, where fighting is now concentrated.

An artillery strike destroyed at least 58 vehicles as they tried to sneak across.