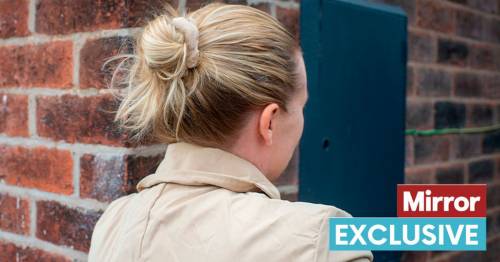 Clare Leahy cradles her four-month-old son and turns her back to our camera, too embarrassed to be photographed.

She is struggling to cope with the worsening cost of living crisis and uses a foodbank to feed her family.

Clare, 41, does not want neighbours or friends to know she is living below the breadline and relies on handouts.

She lives in the constituency of Tory Lee Anderson, who sparked fury on Wednesday after claiming poverty-hit Brits forced to rely on foodbanks “cannot budget” and “cannot cook properly”.

The MP refused to apologise for the remark today and insisted struggling families should learn to cook and cut back on “takeaways”.

She has seen her family’s energy bills rocket to £100 a week, leaving them a “pittance” to live on.

They have sold their car, cancelled TV subscriptions and ditched wi-fi to make ends meet.

Earlier this week Clare was so broke she had to beg a bus driver to let her board for £1 when she took her son for a hospital appointment.

On the doorstep of her home in Skegby, Notts, she said: “Luckily, he took pity on me because it was pouring with rain.”

Clare openly admits if it was not for the Sutton Community Help Centre’s foodbank deliveries, they would go without food.

She told the Mirror: “My partner is a proud man, ex-Army, and doesn’t like people knowing how tough we are finding it.

“People know we use a foodbank because we have to leave the crate they use to deliver it outside the front door. But I’m seeing more of those crates around here now, it’s not just us who is struggling.

“We don’t have enough money to cope with the rising prices of everything. It’s really, really hard.”

Mr Anderson left MPs stunned when – despite the UK being in the grip of a cost of living crisis due to spiralling inflation, Universal Credit cuts and rising energy bills – he said “there is not this massive use for foodbanks in this country”.

In the Commons during a Queen’s Speech debate, he claimed people could “cook meals from scratch” for “30p a day” instead.

The Ashfield MP also told Times Radio he had attended cooking and budgeting courses at his local foodbank where people learned to feed a family-of-five over a weekend for £50.

He added: “But if we get to the real nub of the problem in a lot of cases, there are generations of people that simply haven’t got the skills to budget properly and to go shopping and do a proper weekly shop like we used to back in the day, and use of fresh ingredients to make nutritious meals.

“It’s a lot cheaper than spending money on frozen foods and junk foods and takeaways.”

She added: “He couldn’t be more wrong when he said we don’t know how to cook.”

Shoppers in Sutton-in-Ashfield were equally scathing of Mr Anderson today.

Ian Lane, 78, a retired miner and school caretaker, said: “It’s all right for him in the Commons, getting subsidised food and drink. In the real world people – people he is supposed to represent – are struggling. My wife and I share our house with our son and two grandkids.

“We’re lucky because we don’t have to use a foodbank but we know of lots of others who aren’t so lucky.”

Kevin Hollingworth, 66, who is a full-time carer for his disabled son, said Mr Anderson was speaking “rubbish”.

He added: “People don’t use foodbanks because they don’t know how to cook – they use them because
they can’t afford to buy food.”

Dean Carron helps out at a foodbank
(

Dean Carron, 46, helps out at a foodbank in nearby Mansfield. He said: “There are many people in Sutton who are in crisis.

“What Lee Anderson said is an insult to every one of them and he should be ashamed of himself.

“There are hard-working families round here who are down to the bare bones and it’s only going to get worse.

“I give out food at Arena Church in Mansfield. We are open two days a week and get 200 people each day.

“These people are elderly, they know how to cook proper meals, but they are having to choose between eating and heating.”

“It’s a tragedy that people find themselves in that position in this day and age. If I didn’t have my late husband’s pension I’d be really struggling.”

She added: “I’ve spent my ministerial career working with vulnerable people… cooking lessons will not be the complete solution to that.”

Downing Street said Boris Johnson recognised that people across the country were under major pressure.