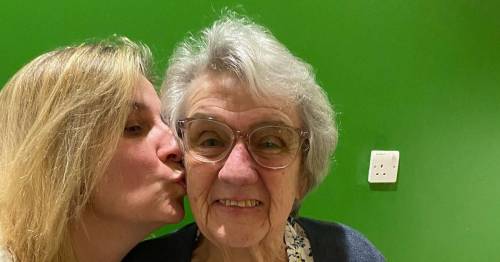 A daughter was left fuming after being handed a £70 fine while taking her elderly mum for her Covid vaccination.

Louise Mowbray was taking her 86-year-old mum Sheila Hunt to get her latest jab at Moor Park Health and Leisure Centre in Blackpool when she was slapped with the parking ticket on April 30.

The pensioner is considered high risk if she were to catch Covid due to her age and health issues including a recent stroke, reports Lancashire Live.

Louise's husband Peter Mowbray believes that the penalty notice was mistakenly dished out by Parkingeye and has hit out against the firm.

The NHS worker said that his wife and mother-in-law displayed a blue badge and entered the correct registration details to park in a disabled bay.

Louise Mowbray and her husband Peter
(

Louise Mowbray with her mum Sheila
(

Peter, a senior operational practitioner in anaesthesia at Blackpool Victoria Hospital, criticised the appeal process which he fears is designed to be difficult to stop people from objecting.

“I feel like I’m banging my head against a brick wall," he said.

"They make it very difficult for people to appeal the fines. They’re not doing what they can to help people when surely they should be.

“I’ve been working nights so I’ve not seen my wife properly the last few days.

"We finally got to spend some time together on Saturday afternoon and my wife spent it writing an appeal letter to Parkingeye and then we had over an hour discussing it with various people who said ‘it’s not my job, it’s nothing to do with me’.

“They’re making it very difficult for people. We’re lucky that we have reasonably paying jobs but for some people £70 is more they can afford, especially when it’s for something that isn’t correct.

"All we want from this is for people to be aware of the situation and for Parkingeye to treat people with more respect.”

Peter explained that the family are used to the registration system as it is similar to another that they regularly use at his gym.

"When we go to the pictures, we enter our car registration too. There’s signs on the way in so you can’t miss them unless you’re not paying attention,” he added.

However, Parkingeye said the details were entered but that the user did not select the option for parking in a disabled bay.

The firm also agreed to cancel the fine as a good will gesture.

While Peter was grateful for the gesture, he disagreed that Louise had made an error and remains frustrated with the appeals process.

“My wife is very meticulous, she works in education, she is very good with detail,” he said.

“I was writing the letter and I was quite interested to find a few things. We both read it and I asked her to confirm to me what they’re saying.

“Parkingeye will only accept appeals in writing in English, but will accept payments on the phone in various languages. My opinion is they are preying on the vulnerable hoping that they can’t write and appeal for various reasons.”

Peter has since heard from other people who have experienced similar problems with parking fines being issued while they took elderly relatives for vaccine appointments.

Louise, a teaching assistant and special needs co-ordinator, has written to Parkingeye to appeal the decision but has yet to receive a response.

The couple also returned to the health centre in search of answers and have been told that while those on site are not responsible for the parking system, one manager has attempted to cancel the fine for them.

Peter said: “Parkingeye are yet to respond to me on Twitter either but Louise has written to them.

"We went to the reception and the lady said it’s nothing to do with them and to go over to the NHS side.

"So we went over there and queued up for a long time, which after working nights is the last thing you want, but they said it’s nothing to do with them and to go back."

On a third visit to the health centre, a helpful manager said she would try to cancel the penalty on their behalf but no confirmation of this has been received.

Peter said it is not just the potential cost that is a problem, but also the stress and time spent trying to fix it.

He said Sheila was left feeling upset and even tried to apologise as she felt there would be no problem if she hadn’t gone for her vaccination.

A Parkingeye spokesperson said: “The car park at the Moor Park Health and Leisure Centre in Blackpool is monitored by ANPR camera systems and has 21 prominent and highly-visible signs in the Blue Badge and Drop Off area that give motorists clear guidance on how to use the car park responsibly.

“The motorist parked in the Blue Badge and Drop Off car park however they did not select the Blue Badge holder button when registering their details in the user-friendly terminal within the centre reception area.

"As a result of this error, they received a Parking Charge Notice, however following a review of the case we have cancelled as a gesture of goodwill.

“Parkingeye operates a BPA (British Parking Association) audited appeals process, which motorists can use to appeal their Parking Charge Notice.

"If anyone has mitigating circumstances, we would encourage them to highlight this by appealing to Parkingeye.

"All motorists are also entitled to a further appeal via POPLA, the independent body which reviews all cases.”