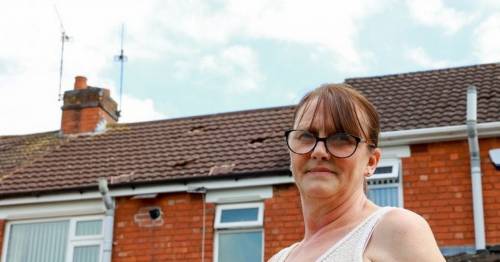 Freak weather left gaping holes in the roof of one home after an unexpected ' tornado,' residents say.

Paula Tutchener was outside when it happened, saying the washing on her line became tangled and trees rattled during a bizarre five-minute interlude.

She told CoventryLive her family told her she was "going cuckoo" until the realised the incident had caused damage to houses on the street.

Explaining what happened, Paula said: "I was in my house and I looked out the window and it was calm as you like. I went out for a fag and there was this wind.

"I had washing on the line and it was spinning and tangling up and the trees were going crazy. It was madness.

"I went in and didn't think too much of it, then I said to my husband and son later on 'I reckon we had a tornado today'. They just looked at each other and laughed and told me I was going cuckoo.

"Then my neighbour told me she had tiles missing on her roof. I went into our garden and our roof had tiles loose, but my neighbour had gaping holes in theirs. Another neighbour said her blinds started going mad.

A neighbour said she had tiles missing from her roof
(

"My house is clean, but when I went upstairs there was dust which had come loose from the top of the wardrobe. My house is never dirty so it didn't make sense? I wasn't upstairs so I don't know how that happened.

"It was so bizarre, madness. I couldn't believe what I was seeing because everywhere else was so calm. It lasted about five minutes, then it went calm again. But my husband and son thought I was nuts. But at least my washing dried quickly!"

Cornwall Live spoke to local weather enthusiast and expert Steve Jackson at Bablake Weather Station who said they were unaware of such an occurrence, but said what was described is usually known as a light tornado.

Previous : Ex-Marine cop killer guilty of savage attack on female guard at top-security prison
Next : Young boy attacked by ‘bear-like’ dog while playing football with his friends in park