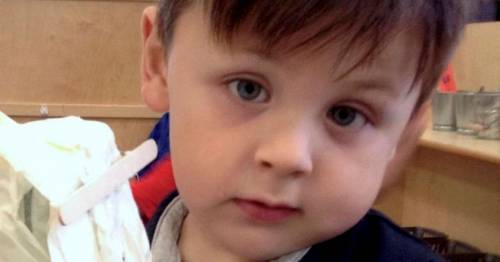 A four-year-old boy died in a tragic accident while riding his cousin's mini-motorbike after losing control and hitting a metal pole.

Durham and Darlington Coroner's Court heard how Lennox Railton-Craggs jumped on the front of a new 50cc Yahama bike and pulled a lever causing it to accelerate, ChronicleLive reported.

He started to come off the vehicle and hit a pole in the ground near his home in Bishop Auckland, County Durham, the inquest heard.

The hearing, sitting at Durham and Darlington Coroner's Court, heard how his father chased after the children's motorbike, picked Lennox up and took him to his home on Elliott Terrace.

The inquest, at the Civic Centre in Crook, County Durham, heard how his family gave him CPR until paramedics attended the scene.

Tributes left at the scene in Bishop Auckland
(

Lennox was rushed to the Royal Victoria Infirmary in Newcastle where he sadly passed away on January 23 this year.

Detective Inspector Leanne Green, from Durham Constabulary, told the court how she had investigated Lennox's death.

She said: "Lennox is described as a little boy who loved motorbikes and quad bikes and had been riding quad bikes with family safely the day before."

She told the inquest: "It just looks like a mini-motorbike but it's made for children so it's quite small. Her father was supervising her, she was learning how to ride the bike."

She said: "Both parents and [the other youngster] describe him as being very excited to see the motorbike and initially asking if he could have a go on it.

The hearing heard how Lennox's mum Rachel Craggs was packing dummies for his younger siblings as they were going to their grandmother's house for Sunday lunch.

She said the youngster remembered Lennox getting on to the bike and telling him that he had to get on the back so she could control the revs. However, he managed to get on the front of the bike.

The inquest, at the Civic Centre in Crook, County Durham, heard how his family gave him CPR until paramedics attended the scene
(

Det Insp Green said his mother, who had been in the kitchen, saw that Lennox had jumped on the front of the bike.

She said: "Rachel shouted at Lennox to get off the motorbike and that he shouldn't be on it, but he's pulled the lever to get it to go faster and the bike has taken off. [The other youngster] states in her account she's been shouting for her mum and Rachel states she's also shouted out."

The inquest heard how Lennox's dad Michael Railton-Thexton had already begun to run after the bike but the grass was slippery, which made it hard to run. The mini-motorbike went onto a path, Lennox started to come off the bike and was thrown up against the metal post.

Det Insp Green said Lennox, who was crying and shouting for his mother, was picked up and taken back to his home.

She said his cries turned to a moaning sound and he changed colour. DI Green said: "As he put Lennox down his legs were giving way and he became unresponsive."

The hearing was told how an ambulance arrived followed by the Great North Air Ambulance Service (GNAAS) and Rachel went with Lennox in the ambulance to the RVI. Lennox was in cardiac arrest when he arrived at the hospital.

Medical professionals found he had a tear in his liver. They attempted to save his life but soon realised there was nothing more they could do and he sadly passed away.

Assistant Coroner Dr Leslie Hamilton told Lennox's family, who were present at the hearing, how he had a background in medicine. He reassured them that any attempts at CPR by them would not have contributed to his condition.

Pathologist Dr Nigel Cooper carried out a post-mortem examination at the hospital on January 28 and told the coroner's court that Lennox had died from a haemorrhage due to intra-abdominal injuries.

Assistant Coroner Dr Hamilton concluded that Lennox died as a result of an accident.

He said: "Nobody intended it to happen, it was something that happened very quickly and spontaneously and before anybody could prevent it."

Prince Bishops Community Primary School, where Lennox was a pupil, earlier released a moving tribute to Lennox, who they described as being "an amazing friend".

It said: "Lennox was a joy. He was such a happy boy who always had a smile for staff and other children. He loved playing with the dinosaurs and in the water but his favourite thing to do was to play outside.

"He was an amazing friend and could be often seen holding another child’s hand and he would go and get a tissue for anyone who was upset.

"We’re absolutely heartbroken by the news. Lennox will be hugely missed by all of the staff at school, especially those who were privileged enough to teach and support him."