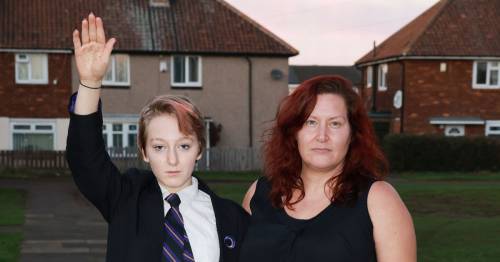 A secondary school has suspended four teenagers after they refused to raise their hand during a strict playground lining-up method – likened to a 'Hitler salute'.

Samantha Sawdon, 40, was outraged after discovering her children Tyler, 15, and Tilly, 13, had to stand with their left foot on a line and raise their hand in the air for silence at break time.

The mum-of-six raised concerns about the "military-style" rules at Outwood Academy Ormesby in Middlesbrough and said they were being compared to a Nazi salute.

She said Tilly was one of seven pupils taken into the library on Thursday morning after refusing to raise their hand while lining up to go into the building, reports Teesside Live.

The school said four pupils have been suspended – but not just for refusing to raise their hand.

Samantha, who is also mum to to an adult daughter, Thomas, six, and two-year-old twins Oscar and Wilson, said: "Yesterday Tilly didn't raised her hand but due to the hype of it they must have let it go. But today they have come back with a vengeance.

"I felt mixed emotions because I don't want her getting into trouble.

"I'm annoyed that the kids haven't got a voice. They're not little kids no more, they've got feelings. They should be given respect."

Samantha told Teesside Live earlier this week that her children were unhappy with the lining up method.

The full-time mum said: "They are not happy, they have even said kids are shouting 'Heil Hitler!' when they are doing it.

"It's like a military camp – it's like a salute. Why are the kids having to raise their hand?

"I feel they are being turned into performing monkeys. What are they going to do next? Rub their tummy when they're hungry? It's an unnecessary action."

Samantha said Tilly refused to raise her hand on Thursday morning and was taken into the library with six others, where she also failed to hand over her mobile phone.

Mr Hassack has now hit back at the comments made about the schools lining up method, which have been shared on social media.
(

She said her daughter has been suspended from the school until Monday and will be taught over Google Classroom.

Samantha, who has got a meeting with the school on Monday, said: "I have told Tilly that she shouldn't have had her mobile with her.

"It's a shame they are getting backed into something and they have no voice. They're not allowed to speak or have an opinion.

"She's got a voice, she still hasn't been able to voice her opinion.

"Kids are our future. If you can't back your child for believing in something and standing their ground then you have got problems yourself."

Mr Hassack has now hit back at the comments made about the schools lining up method, which have been shared on social media.

He said: "This whole situation is utterly ludicrous and stems from a parent's social media post in which she compares school children lining up to Nazi Germany. This is incredibly dangerous, insulting, offensive and frankly rude.

"Our staff and children work incredibly hard and I’m not going to allow an unintelligent social media post to affect all of the good work going on at Outwood Academy Ormesby.

Samantha Sawdon is complaining that her daughter, Tilly 13 and other pupils at Outwood Academy in Ormesby are made to line up with their foot touching a line and their hand raised in a "Nazi style salute"
(

"This parent clearly wants us to lower standards in school – which we're not going to do."

In relation to the suspensions, he said seven pupils were taken into the library, after failing to put their hand up during lining up, so that they could receive an intervention from a member of staff.

Mr Hassack said four of them were suspended, but this was not just for failing to put their hand up.

He said: "We would never suspend a child solely for not lining up and whilst I can’t comment on specific cases, I will say is that a school it’s sometimes necessary to use suspension as a final resort to ensure that schools remain safe, orderly and calm so that all children can have a good experience of school.

"Children may be suspended as a last resort for various reasons. It could be that a child has refused a number of reasonable instructions."

Mark said that lining up is a "standard operating strategy" of a school and is not a new method which has been introduced.

"Children putting their hand up is not new. The only thing slightly different is the location in the school where students are doing it.

"It is just a standard operating strategy of a school. It doesn't just happen in Outwood schools, it happens in lots of different schools.

"I think anybody who comes into our school can see that children are respected by adults and vice-versa and this very clear when you walk around any of our schools.

“For children who have additional needs, we always ensure reasonable adjustments are in place and for any children who find it difficult to meet our expectations, we provide a wealth of support to enable them to do so. What we won’t do is lower our standards but we will do everything we can to help all children to meet them.

"I would say the relationship between adults and children in this school is particularly strong.

"Everyone in education is dealing with incredibly challenging circumstances in the midst of a pandemic. We just need to get on with educating children and not be distracted by this nonsense.

"We would always listen to the voices of parents and children but some parents must understand that this does not always mean that they will get their own way."

Previous : Quitter’s Day 2022: Experts share 5 tips on how to stick to New Year’s resolutions
Next : Devastating dust storms cause ‘eternal black summer’ where it hurts to blink or cough – World News