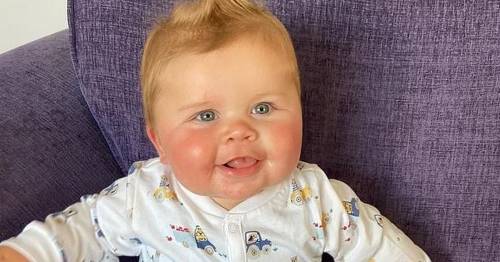 A foster-mum-to-be has admitted “shaking the life” out of the one-year-old she was planning to adopt.

Laura Castle admitted she “lost her mind” when baby Leiland-James Corkill cried after she gave him breakfast at the family’s home in Barrow-in-Furness, Cumbria, in January last year.

The 38-year-old denied murder but admitted to manslaughter and previously told officers that Leiland-James had suffered the “catastrophic” head injuries in a fall from the sofa.

Castle and her husband, Scott, 35, had been looking after baby Leiland-James for five months with an intention to permanently adopt the tot.

She told police that the baby had suffered the injuries from a fall from the sofa but experts said that the injuries were inconsistent with her story.

The court previously heard how Leiland was only eight months old when he was placed with the Castles, in August 2020, as they were looking to adopt him.

In the witness box at Preston Crown Court yesterday, she broke down in tears as she gave her account when questioned by her barrister David McLachlan QC.

Castle told the jury: “He was crying and I shook my beautiful baby boy. I just wanted him to stop crying.”

Mr McLachlan asked : “How many times did you shake him?" to which she replied: “I don't know."

Mr McLachlan asked:" How much force did you use to shake him?"

"I picked him up. I just could not stop the crying. I don't know who that person is . I realised what had happened and I thought he was winded.

“I picked him up and his hands were, like, stiff and he was, like, gasping. Then he went floppy and I thought he was winded .

"I put a bottle in his mouth as a comfort. I was trying to comfort him."

She accepted she killed her “little boy” but said she had “no reason” and claimed it was never her intention.

“He was screaming. He had done nothing, he was just an innocent little boy and my actions.

“I do not have an excuse. I just panicked. I was terrified of the consequences of my actions and ashamed."

The court was told that due to the text messages her husband was aware of his partner's abuse of the one-year-old and in text messages took her side when she said she “leathered” the baby.

The court previously heard how on September 23, 2020, she texted her partner saying: "I honestly really don't like him lately, hes an absolute moaning winge bag and I totally regret doin this.”

The court were told how there were a number of messages in which she used aggressive and unpleasant terms about the baby.

The jury were previously told that Mr Castle “actively encouraged” his wife's behaviour.

In the messages, the court heard Mrs Castle said: "I'm goin to lose my mind. He just pisses me off all the time, can never just have a nice day or night ever.

"Although I need to stop smacking him cos if I start I'll not stop at one point and it's not getting us anywhere and then I feel bad."

The court heard that the next day she messaged: "I've just absolutely leathered him, I can('t) take this anymore, he's gonna have to go."

She also had also lied in her original version of events, omitting the truth that she was responsible for the baby’s death.

She said: “I found it hard to admit that my child had died because of my actions. I cannot take it back or change it. It was because of me."

She will face cross examination by prosecutor Michael Brady, QC when the trial resumes tomorrow morning.