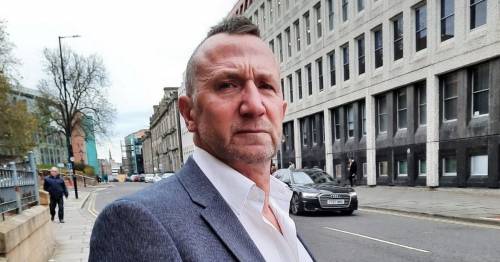 A military veteran has been jailed after tweeting that a member of the Scottish Parliament should be assassinated.

Andrew Brews served in Northern Ireland and said that MSP James Dornan, who is an SNP politician for Glasgow Cathcart, “deserved one behind the ear.”

He described the politician as a “dirty little Nationalist rat.”

Brews, a landlord, admitted that the phrase was used during the Troubles to describe a method of assassination.

The former-soldier confessed he posted the message on a Twitter thread after seeing a picture of the MSP posing in front of a flag linked to the Irish Republican Army.

He has said posting the image had been a “knee-jerk reaction”.

Supporters of Mr Dornan then sent him the tweet and the MSP told the trial he had been concerned by the use of language in it.

Brews tweeted: "As I have told him, if he thinks standing posing and smiling in front of a flag belonging to a Republican proscribed organisation isn't sectarian then he's deluded.

“Just another dirty little Nationalist rat, deserves one behind the ear."

Sheriff Alison Michie told Dundee Sheriff Court: "Mr Dornan said he receives Tweets like this, but nothing as concerning as this particular Tweet.

"He was clear what he took it to mean and perceived that to be a threat and something that could encourage others.

"I do consider the Tweet does meet the criminal standard and is menacing in character. I accept it was a knee-jerk reaction.”

Brews, 59, from Fife, Scotland, was found guilty of sending messages to James Dornan on 26 February 2019 that were grossly offensive, or indecent, obscene or of menacing character in that it suggested he be shot.

Brews said: "If I was believed to be a serious threat to anybody why did it take the police eight months to come and charge me? The whole thing was around Mr Dornan's perceived sectarianism.

"Seeing that picture made me very angry that someone in the pay of the public was clearly supporting a terrorist organisation that has killed members of that public.”

Brews said that he had been troubled by his past experiences, especially those in Northern Ireland, and had been on medication, and undergone counselling to deal with what happened.

James Dornan MSP, is an SNP politician for Glasgow Cathcart
(

"Mr Dornan sees himself as a tough Glasgow hard man who is affected by nothing. All of a sudden he is affected by this message that wasn't even sent to him.”

Brews also said he thought the entire case was about Dornan “getting at someone” he considers anti-SNP.

Sheriff Michie heard Brews had no previous convictions and had stopped using Twitter since his arrest. She fined him £400. Outside court, Brews described the prosecution as "a stitch-up" and said he was considering an appeal.

Dornan has a history of controversial remarks, having been accused of homophobia and telling a Conservative cabinet member he would “rot in hell”.