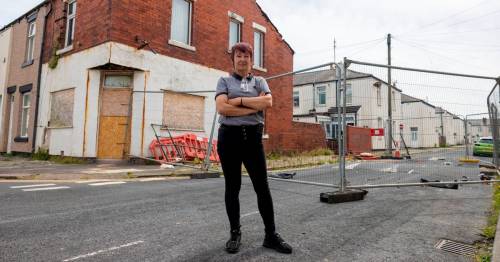 A Costcutter sits in a small converted garage on the corner of a road in Blackpool.

The properties on both sides look empty, with boards covering their windows.

Close to the bright lights and well-kept holiday accommodation of the promenade, the nearby streets are filled with family homes.

But, according to the residents the store serves, there is a "clear divide" between them and the tourist hotspots on the seafront.

They have problems in common such as litter, reports LancashireLive, but here it is left unattended – with the piles of rubbish getting higher and higher.

While minutes walk away are donkeys' stables and a heritage trail, those in this part of the resort say they feel there is "nothing they can do" about daily antisocial behaviour and waste left for seagulls in alleyways.

Residents feel there's 'nothing they can do' about daily antisocial behaviour
(

Tracey Pipon, 57, moved to the area in 1989. The market trader has had to reduce her travel to other cities due to the cost of fuel.

She recently came to the end of her tether with the ongoing waste behind her house, and has started sharing videos to Facebook calling out the rubbish.

Despite years of PACT (Police And Communities Together) meetings where residents have asked for deterrents or even CCTV to be installed in the gated alleys, it still hasn't happened.

Tracey said residents have been asking for a deterrent to be installed 'for years' but nothing has ever surfaced.

"Why do we have to put up with it? Kids are playing football in the street, banging them off bay windows, it scares the hell out of you and I'm young, imagine being 70 or something, you can't walk round because there is gangs of them, they don't play, they destruct," Tracey explained.

The pavements on the street are covered in shattered glass and waste, the electrical wires above also have shoes tied around them.

"This is the worst ever the area has ever got," Tracey said, "my mental health is shocker. I don't spend time at home.

"I go away for work and I come back. It's the destruction in between.

"As you can imagine, I've upped my anti-depressants, and that's in the summer.

Tracey's mental health has suffered as a result
(

"The only remedy for this is CCTV, and they've promised us them this time, but I'll believe it when I see it.

"It's not a lot of people's fault, but there is a few that ruin it for themselves."

Tracey feels the area has been 'forgotten' and says it is easy to draw comparisons between her own street and tourist-focussed streets like Coronation Street.

She said she pities those staying in nearby AirBnB's who have to walk past.

"We're swept under the carpet round here," she continued, "If you go round the corner you'll get to Coronation Street, there they get a hoover come round.

"Round here, you don't. There's a dividing line between the tourist trade and here. Don't get me wrong, the council lads go out and beyond."

Tracey feels the area has been 'forgotten'
(

Tracey said living in the area is like being in 'Catch 22'. She continued: "Living round here is worse than getting sent away for murder.

"Because I bought my house, I'm in the trap of I've paid for the house, where do I go? If I was renting I'd have moved 20 years ago.

"But I grafted enough to buy my own house but you're in limbo. I don't want another mortgage."

Chris Malone operates from his family-run Garage on Ribble Road. He said that every Monday both himself and his team are faced by a collection of rubbish outside the business.

He said: "Our business has been here for about 54 years, we've seen everything come and go here. Recently regarding the rubbish, it has got out of hand.

"I don't blame the council one little bit, I think they're doing their bit, but they're fighting a losing battle.

"A lot of people around here, and I know its difficult with seagulls and plastic bags, but customers come here and look down the back alley and say, isn't it a mess?

"They say it every time. It's not a reflection on us, but it is a mess."

Aside from the rubbish, Tracey fears the worst due to concerns houses have had their gas bypassed.

On one occasion, Tracey says a house nearby was closed off following tampering with the gas inside.

Rubbish is a big issue in the area
(

The business has operated from its location for 40 years.

Rebecca told LancsLive: "I wouldn't move because we're well established, but there is a divide because there's no money is there, they've let it go.

"They are regenerating so I think it will come back. I'm here 'til eight or nine at night sewing sometimes and there is groups of people stood on the road, you can't even walk past them, I wouldn't let my daughter walk past them.

Both Rebecca and Tracey claimed that activity on the main road includes drug dealing and grooming.

Blackpool Council was approached for comment by LancashireLive, but did not provide one ahead of the deadline.

Previous : Prince William’s godmother is one of the Queen’s closest friends and advisors
Next : Cardiff Bay chemical leak: Three in hospital as public told to close windows and doors