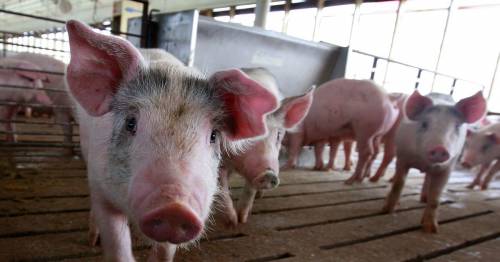 Foreign butchers look set to be handed temporary visas amid fears 150,000 pigs could be destroyed due a labour shortage in the farming industry.

Tory environment Lord Benyon said on Thursday an announcement was "imminent" and the Government was poised to back down on restrictions for meat industry workers.

It comes after farming leaders warned 150,000 pigs could be destroyed as a labour shortage has led to a backlog of animals ready for slaughter.

Farms are struggling to find space for the extra pigs – leaving them with no choice but to cull them in the face of overcrowding concerns.

Pressed about the issue in the House of Lords, Lord Benyon told peers the Government's plan would mirror emergency measures announced last month for the poultry industry.

Those included 5,500 temporary visas for workers and 5,000 tforHGV drivers in an attempt to prevent shortages in the run-up to Christmas.

Fears are growing of overcrowding at farms

Labour frontbencher Baroness Jones of Whitchurch highlighted the latest editorial in Pig World magazine, which was scathing of the Government's handling of the current crisis, accusing it of "arrogance and incompetence".

She said: "The fact is there are 150,000 pigs which are unable to be slaughtered for consumption and already farmers have had to cull and destroy over 6,000 healthy pigs.

"Talking is great, but when is the Government going to provide those temporary visas and the lower language requirements for skilled butchers which lie at the root of this crisis?"

Responding, Lord Benyon said: "We care deeply about this sector, the people that work in it, the welfare of the animals concerned, and want nothing more than to smooth out the perfect storm of a variety of different issues which have brought this to a head at this particular time.

"I had hoped to be able to come to the House with an announcement – it is imminent.

"I think she will be pleased with the hard work that ministers and officials have put in to show that we do care and we want this industry to get back on its feet."

Referring to labour problems in the industry, he said: "These are principally because, at the end of the Covid restrictions, many of the overseas workers returned home and we are seeking to find ways of bringing large numbers of them back.

Liberal Democrat Baroness Bakewell of Hardington Mandeville said: "It is heartbreaking to raise stock from piglets to fully grown pigs ready for slaughter and the supermarket shelves, only to have to cull them on farm and their meat be wasted.

"An influx of skilled workers from abroad could alleviate the situation. What is the minister doing to lower the English language requirement for mat processing workers who clearly do not need the same level of fluency as a GP?"

Lord Benyon said: "Part of our discussions, and the announcement I hope will be able to be made imminently, reflects what is also done in the poultry industry where those changes were made to encourage more workers to come over and operate in that sector.

"And we hope that this will alleviate the labour problems in this sector."

Labour peer Baroness Hayman of Ullock said: "The Government's response, including the Prime Minister's, to this crisis has been pretty hopeless, to put it mildly, so far. Unfortunately, it has been catastrophic to many pig farmers already because the Government has taken so long to act."